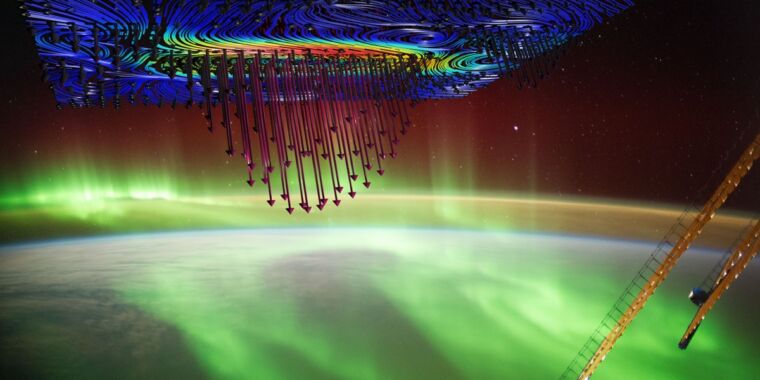 Jun 10, 2021 2 mins, 0 secs
According to a new paper published in the journal Nature Communications, electrons in the Earth's ionosphere catch a plasma wave in order to accelerate toward Earth with sufficient energy to produce the brightest types of auroras.

The lights tend to only be visible in polar regions because the particles follow the Earth's magnetic field lines, which fan out from the vicinity of the poles.

There are different kinds of auroral displays, such as "diffuse" auroras (a faint glow near the horizon), rarer "picket fence" and "dune" displays, and "discrete aurora arcs"—the most intense variety, which appear in the sky as shimmering, undulating curtains of light.

Discrete aurora arcs can be so bright, it's possible to read a newspaper by their light.

It has been suggested that Alfvén waves are responsible for the acceleration of precipitating particles that ultimately give rise to discrete aurora arcs.

Those storms in turn can cause the magnetic field lines from the Southern and Northern Hemispheres to break and reform (magnetic reconnection), before snapping back toward Earth like a stretched rubber band.

That rebounding launches Alfvén waves, which travel toward Earth along the magnetic field lines, accelerating along the way to as much as 35,000 km/s (almost 80 million mph), thanks to the increasing strength of Earth's magnetic field.

As energy is transferred from waves to electrons, those electrons accelerate up to 20,000 km/s (or 45 million mph) before colliding with atoms in the thin air of the upper atmosphere, producing a discrete aurora arc.

But a definitive measurement for both Alfvén waves and the accelerated electrons was still lacking.