As Joe Biden and Vladimir Putin reflect on the outcomes of their summit, an invite to the Kremlin or White House seems unlikely - ABC News 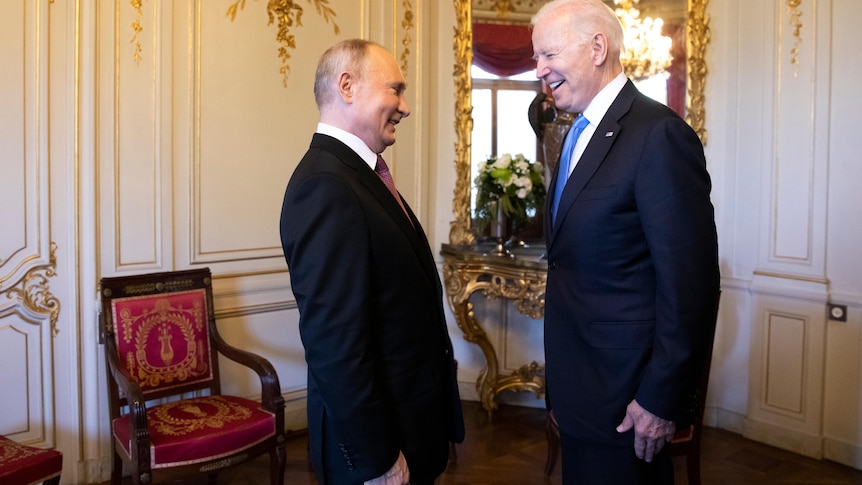 Follow our live coverage for the latest news on the coronavirus pandemic.

Better still, if you look past the dour, workmanlike, post-summit scorecards Joe Biden and Vladimir Putin wrote for themselves in Geneva, there are the makings of a thrilling series of Russia-America rematches to come.

Make no mistake, Biden and Putin are engaged in serious brinkmanship on the many serious problems confronting the world – cyber attacks that can cripple an economy, and nuclear weapons that could annihilate billions of people if not carefully managed.

Leaving aside an ugly melee between Russian and US media — abetted by brawny security guards lacking any sense of occasion at the opening photo opportunity — by the numbers, Geneva appears to have charted a course for relations in regulation time.

Working groups have been established on cyber security, which Putin describes as "extraordinarily important", as well as one on nuclear arms control and a third for potential prisoner exchanges.

Still, he wasn't completely passionless about the prospects of some working relationship with Biden.

"I know there was a lot of hype around this meeting, but it's pretty straightforward to me – there is no substitute for face-to-face meetings between leaders, none," he said.

The US leader is more concerned with the foundations of his own working relationship with Putin than particular projects to be handed to officials on nuclear safety, cyber and prisoner exchanges.

In their quicker-than-expected talks of just over two and a half hours, Biden insisted he made "no threats" to Putin, because the Russian well understands that: "It's clearly not in anybody's interests, your country or mine, for us to be in a situation where we are in a new Cold War.".

At least on rampant cyber attacks and criminals waging ransomware heists, a willingness to wield American power is explicit rather than implied.

This much Putin must know already, after US cyber strikes, that we're aware of, at a minimum, on Iran and North Korea.

Despite a lengthy — and in Russian media circles controversial — interview granted to the American NBC network before Geneva, getting Americans to understand his thinking on free speech and political freedoms has been an impossibility for Putin.