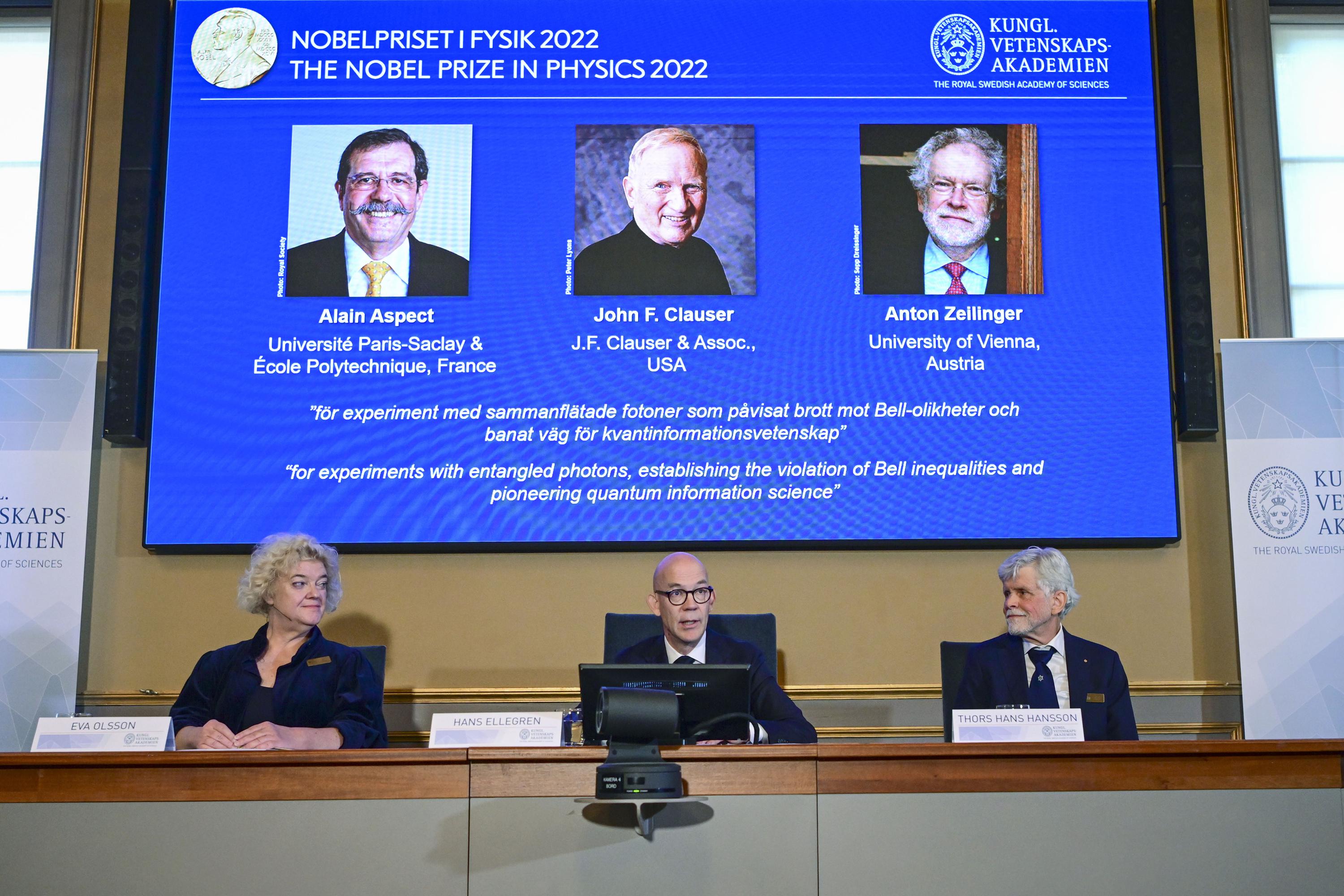 Three scientists jointly won this year’s Nobel Prize in physics Tuesday for proving that tiny particles could retain a connection with each other even when separated, a phenomenon once doubted but now being explored for potential real-world applications such as encrypting information.

Clauser and Austrian Anton Zeilinger were cited by the Royal Swedish Academy of Sciences for experiments proving the “totally crazy” field of quantum entanglements to be all too real.

“It’s so weird,” Aspect said of entanglement in a telephone call with the Nobel committee.Clauser, 79, was awarded his prize for a 1972 experiment, cobbled together with scavenged equipment, that helped settle a famous debate about quantum mechanics between Einstein and famed physicist Niels Bohr.Aspect said Einstein may have been technically wrong, but deserves huge credit for raising the right question that led to experiments proving quantum entanglement.In quantum entanglement, establishing common information between two photons not near each other “allows us to do things like secret communication, in ways which weren’t possible to do before,” said David Haviland, chair of the Nobel Committee for Physics.Quantum information “has broad and potential implications in areas such as secure information transfer, quantum computing and sensing technology,” said Eva Olsson, a member of the Nobel committee.While quantum entanglement is “incredibly cool” security technologist Bruce Schneier, who teaches at Harvard, said it is fortifying an already secure part of information technology where other areas, including human factors and software are more of a problem.Clauser, Aspect and Zeilinger have figured in Nobel speculation for more than a decade.The Nobel committee said Clauser developed quantum theories first put forward in the 1960s into a practical experiment.

Aspect was able to close a loophole in those theories, while Zeilinger demonstrated a phenomenon called quantum teleportation that effectively allows information to be transmitted over distances.

“Using entanglement you can transfer all the information which is carried by an object over to some other place where the object is, so to speak, reconstituted,” Zeilinger said.

5 Calling COVID “airborne AIDS" is inaccurate. But what it does to your immune system is still scary - Salon

12 Have you been training right for your stage of life? A doctor's guide to maximising your cycling potential at every age - CyclingWeekly

16 Is the brain a quantum computer? A remarkable pair of studies suggests so - Salon