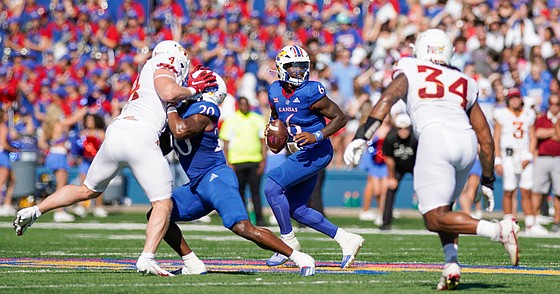 It was hard to tell in the moments immediately after Kansas' 14-11 win against Iowa State on Saturday what the prevailing emotion was among the players flooding the field.In a game that featured all manner of bizarre outcomes, some big and others small, it was a missed 37-yard field goal attempt by the Cyclones with 32 seconds remaining that handed the Jayhawks their first 5-0 start in 13 years.View a gallery of images from Saturday's game between the Kansas Jayhawks and Iowa State Cyclones.Saturday's game was the first time this season things didn't look particularly easy for Kansas, which finished with 213 yards, including 112 on the ground, but still never trailed.Junior quarterback Jalon Daniels completed just seven of 14 passes for 93 yards, and he ran only eight times for nine yards against an Iowa State defense that entered having allowed just 14.5 points, 266 total yards and 75.8 rushing yards per game.In fact, Kansas gained just 43 yards and three first downs in the second half, when Daniels completed only two of four passes.Crucially, it held Iowa State to field goal attempts on three of its final four drives, including two in which the attempts failed, and was able to stop its opponent on a potential winning series that ended when freshman kicker Jace Gilbert missed a tying attempt wide left."The whole game, I was preaching to the defense that this game is going to come down to us," junior linebacker Rich Miller said.Hishaw, who left the game in the fourth quarter with what appeared to be a right leg injury, was taken via ambulance to the hospital.

He was fighting for additional yards on a second-and-14 play with 9:20 left when he was tackled and fallen upon by five Iowa State players.

Iowa State sophomore quarterback Hunter Dekkers, who went 30-for-48 for 287 yards and a touchdown, was intercepted on third-and-12 by sophomore cornerback Cobee Bryant, who skied to snag a ball that redshirt senior wide receiver Xavier Hutchinson did not know was headed for him.The Jayhawks turned that turnover, recovered at Iowa State's 19-yard line, into a 14-0 lead after Daniels ran 2 yards into the end zone with 5:25 left before halftime.Box Score: KU 14, Iowa State 11 ( .PDF ).

A pass interference penalty on Bryant gave them a new set of downs, and on the ensuing play, Dekkers and redshirt senior wide receiver Dimitri Stanley connected for a 53-yard reception on a post route that moved Iowa State to Kansas' 5-yard line.

The extra-point snap was high, however, and redshirt senior quarterback Blake Clark, the holder, ran the ball into the end zone for the two-point conversion to trim Kansas' lead to 14-8.

A 35-yard field goal by Gilbert with 5:27 remaining in the third quarter, one play after Kansas senior safety Kenny Logan Jr.

broke up a pass in the end zone, kept Iowa State afloat.

Bryant seemingly had another interception at the Kansas 3-yard line with 12 minutes to play but a review determined Bryant didn't secure the ball before hitting the turf.

He entered Saturday's game 14-for-15 on extra points and 5-for-5 on field goals, but he earlier missed 38- and 45-yard field goal attempts off the right post.

The drive featured a completed pass by back-up QB Jason Bean, a pass interference call on Iowa State and a perfect option pitch from Jalon Daniels to Devin Neal, who rumbled for 30 yards to set up the TD.

After Iowa State held the Jayhawks on the opening series of the second half, the visitors marched 62 yards in 12 plays to cut into the KU lead with a field goal.

Iowa State nearly got more on the drive, but a big hit by KU’s Kenny Logan Jr.

Defense stepped up, and we survived a tough game against a good team.

I give credit to Iowa States defense but our play calling went from creative to really stale and conservative in the second half.

Nine minutes to play and we run the ball for zero yards rather than trying to post more points and get past midfield.

If the score were 14-9 down the stretch ISU might have scored a TD had they not had the option to kick the game losing fg.

But IMO, pulling the ball out of the hands of a player when there is no forward progress while he is being injured is nothing to brag about and is a play that should be reviewable and turnover reversed

4 hours, 10 minutes agoYes, it turned out that Kansas ended up in better field position due to the MISTAKE of over turning the interception

5 Ancient superpredator that lived 328 million years ago was 'the T. rex of its time' - Livescience.com

13 A lingering question as USA preps for Iran: What's up with Gio Reyna?

15 Bachelor in Paradise's Jacob Rapini Pens Note to Jill Chin After Split: 'I Deserve to Be Alone' - Yahoo Entertainment