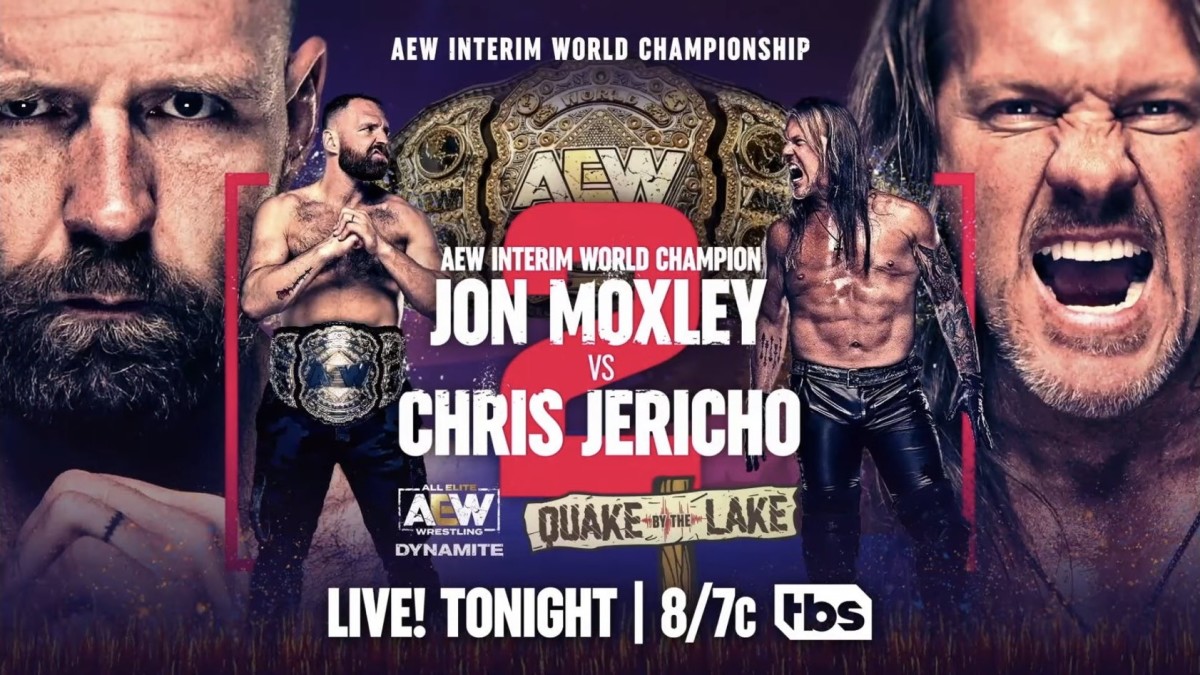 Jon Moxley will defend the interim AEW World Championship against Chris Jericho in a rematch of the 2020 Revolution pay-per-view main event. .

Darby set up for his wild tope, but the lights went out, and when they came back on, Malakai Black and Buddy Matthews were standing in front of King.

Darby went for the dive anyway, but Julia Hart tripped him up, allowing Black and Buddy to beat him down.

King opened the coffin, but Darby fought back with a chain and choked him out.

He talked about the meaning of the AEW World Championship, saying it was about enduring pain.

Penta sent Rush to the floor, where Fénix landed dives on both opponents.

Once back, Fénix took out Rush with an assisted tijeras and Penta hit a backstabber on Andrade.

Andrade inadvertently thrust kicked his own partner, Penta cut off the hammerlock DDT, and Rush took out Penta with a shotgun dropkick.

Rush crushed Penta with a powerbomb but was cut off by a rolling cutter from Penta.

He went for the Fear Factor on Rush, but Rush fought out of it and landed a jumping knee.

Rush had it won, but Penta unmasked himself to make the save, like the famous Octagon spot.

He pointed out how they were in the building where Page won the AEW World Championship.

Powerhouse Hobbs was asked backstage about being done with Ricky Starks, but before he could answer, QT Marshall and The Factory walked up and said they'd finish Starks tonight.

2point0 said Jericho would win the title tonight, and they have a celebration prepared.

– After the match, Nick Comoroto attacked Starks, with Starks able to fight him off momentarily.

Athena posed with the TBS Championship.

Jericho hit a double underhook backbreaker and a lionsault for two, but Moxley went for a juji gatame on the kickout.

They fought on the top rope, where Jericho hit a frankensteiner for two.

Back in the ring, Moxley applied a crossface.

The production team went to picture in picture with Moxley locked in the Walls, ostensibly a finishing hold, which was an odd choice.

Jericho held the Walls for legitimately minutes, through the entire commercial break, with only a brief reprieve for Moxley.

He went for it again inside the ring, but Jericho countered it into a Codebreaker for a near fall.

Jericho grabbed the title belt but went face first into the exposed turnbuckle, allowing Moxley to lock on a rear naked choke and then the Bulldog choke

Jericho, busted open badly, turned it into the Lion Tamer, which Moxley in turn floated over into ground and pound

Jericho fought and fought but eventually tapped as the champ retained

Jericho set up to smash Moxley with the belt, but then..

The Jericho Appreciation Society retreated, which meant it was time for Punk and Moxley to face off

2 15-year-old Savannah Graziano, killed in Hesperia shootout, had been staying with father before mother's slaying in Fontana - KABC-TV

6 Real-estate agents are ripping off homebuyers

8 Shania Twain says a dinner with Oprah Winfrey 'all went sour' over the topic of religion: 'No room for debate' - Fox News

15 Americans will get the economy they vote for, so be careful