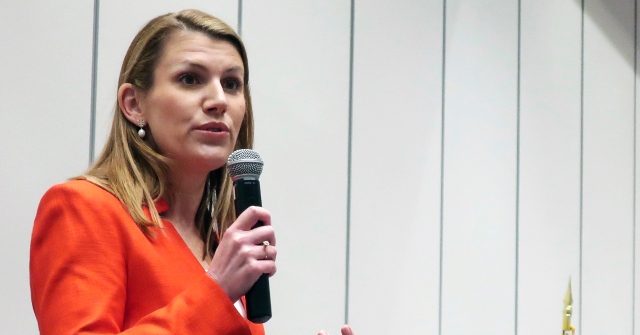 Jan 17, 2022 1 min, 20 secs
Adkins, a business executive for 15 years and the former Kansas Republican Party chair, said it is essential to flip House seats like the one Davids currently represents and win back the House.

“I see a strong conservative streak right now and in, in center-right voters in general because people want to see limited government, they want freedom, they want to be the decision-makers.

The former Kansas Republican Party chair noted that Davids, while in Congress, has voted with House Speaker Nancy Pelosi (D-CA) and Biden 100 percent of the time, which has ultimately allowed the Democrats to enact partisan policies and has increased government spending, which has resulted in increased inflation.Discussing the increase in government spending, Adkins told Breibart News’s Washington Bureau Chief Matthew Boyle that “people are mad” because the increased spending has caused an inflation surge.

“But more important, they see that the fact that we have so much money in the system, and that the federal government, that Sharice Davis and Joe Biden has pushed so much federal spending.

Adkins said due to all of the government standing in the sizable rise in inflation, she believes in the next elections there will be “very low numbers for Joe Biden and related to Sharice Davids when it comes to independence, and there’s going to be there’s going to be a significant backlash, and it will be good for America.”.

We don’t want as Sharice David’s, you know, has consistently pushed the government making all the decisions, we want freedom, we want the individual in the family to make the decisions.”