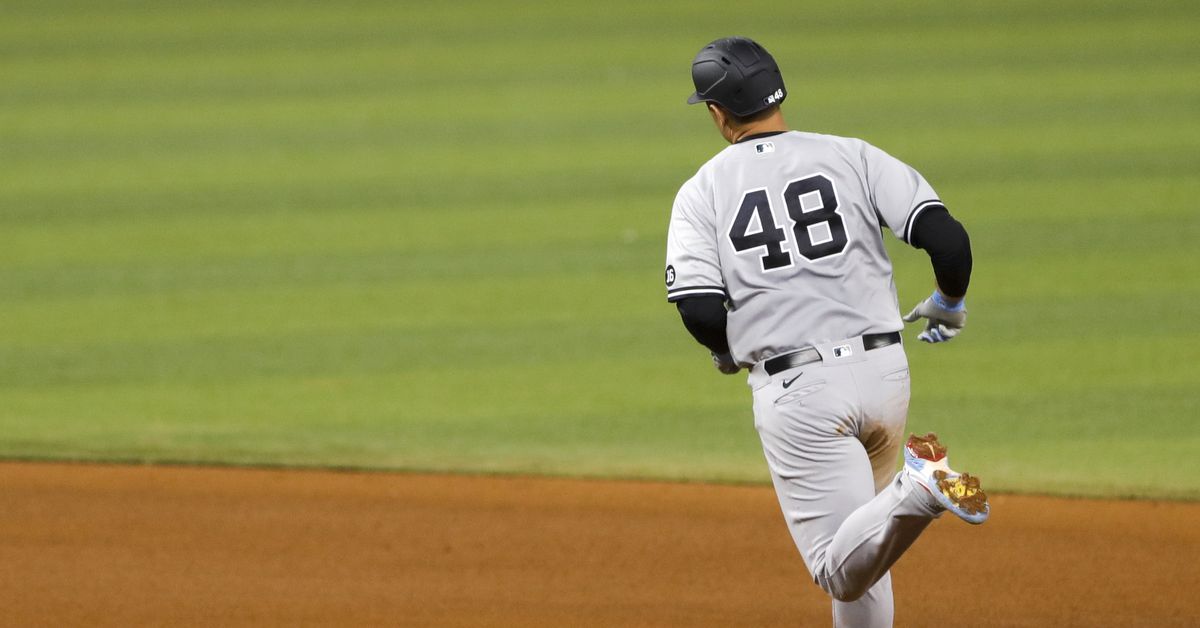 Aug 01, 2021 2 mins, 2 secs
Well, Anthony Rizzo has done just that, because in just his second day as a Yankee, he reached base five times, scored three runs, and flashed the leather, capping it off with a big seventh-inning home run to lead the New York Yankees past the Miami Marlins, 4-2, on Saturday evening.

Two innings later, he led off the fifth with a single, ultimately scoring on a bases-loaded wild pitch with Gio Urshela at the plate.

With that 410-foot homer that was recorded at 108.7 mph off the bat, Rizzo became just the second player with five runs and two RBI his first two games as a Yankee.

In the second inning, Giancarlo Stanton drilled a line drive into left-center field that Statcast recorded at 116.9 mph off the bat and would have traveled 411 feet had there not been a wall in the way.

It turned out to not matter â€” Odor would single Rizzo in and SÃ¡nchez would have a fly ball bounce into the right field seats for a ground-rule double to score Stanton.

The following inning, the Yankees loaded the bases with two outs, courtesy of Rizzo and Stanton walks and an Odor single; SÃ¡nchez, however, flew out.

In the fourth, the Yankees had runners on first and second to drive Taylor Rogers from the game, but were unable to capitalize when David Hess struck out Aaron Judge to end the frame.

Rizzo led off the inning with a single, followed by Stantonâ€™s second walk of the day; both runners astutely advanced to third on a fly out to left field by Odor.

The Yankees still managed to score a run, courtesy of the teamâ€™s most valuable player, Wild Pitch with Runner on Third.

Anthony Rizzo reaches home on a wild pitch, and the Yankees take a 3-2 lead.#YANKSonYES pic.twitter.com/c34RgnC705.

He lost the strike zone a bit in the second, walking Alfaro and De La Cruz to put runners on first and second with one out, but after Odor called a mound visit, SÃ¡nchez and Rizzo picked off De La Cruz and GermÃ¡n struck out Lewis Brinson to get out of the inning.

The only time he got into any lasting trouble was the fourth inning.The Yankees look to achieve the impossible tomorrow and actually complete a sweep, with first pitch scheduled for 1:10 PM ET