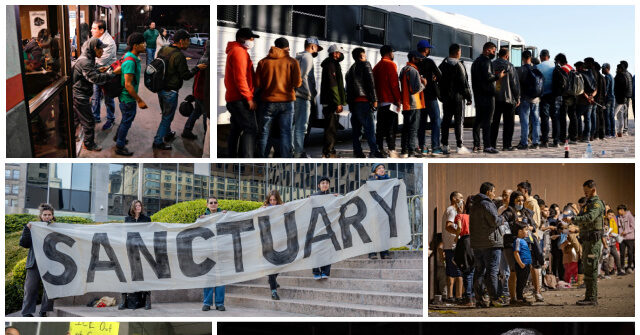 President Joe Biden’s border chief is using Mexico-based migrant advocacy groups to smuggle off-the-books economic migrants into Americans’ workplaces and housing.Border chief Alejandro Mayorkas is allowing the progressive groups in Mexico to help job-seeking migrants file online legal requests for “immigration parole.” Many of the applications are quickly approved, so allowing the poor migrants to avoid the cartels’ border taxes, and to safely walk into the United States through the official “Ports of Entry.”.This process allows economic migrants to take U.S.Agency data suggests that up to 100,000 southern migrants have been quietly delivered into the United States by Mayorkas, a Cuba-born, pro-migration zealot.The page shows the dramatic rise in migrants registered at the official ports of entry by the Office of Field Operations agency.

Many of these migrants appear to be part of the parole pipeline — and the monthly inflow grew fivefold from October 2021 to 26,405 in October 2022.

The stealthy route helps Biden, Mayorkas, and their anti-border allies in two ways, said Fishman, who now works with the Center for Immigration Studies (CIS):.

The second thing is that … [migrants] don’t have to commit a federal crime to cross.

Mayorkas’ deputies are trying “to get as many people as they possibly can inside the country, in as many different ways as possible, and this [parole pipeline] way is especially attractive … That’s why this method is ballooning like it is, why they’re having to expand the shelters, they can’t keep up with the demand [from migrants].”.The parole pipeline is just one of many ways in which Biden’s deputies are accelerating their extraction of extra renters, consumers, and workers from poor countries for subsequent use in the U.S.For example, Biden’s deputies have doubled the number of illegal migrants protected by the Temporary Protected Status program, allowed more than 600,000 illegals to sneak across the border, and allowed roughly 2.3 million southern migrants to cross the border.

They have also minimized the deportation of illegal migrants and overstaying workers.

The administration is also ramping up the inflow of legal immigrants, visa workers, and illegal workers who arrive on B-1/B-2 tourist visas.Biden’s record-setting illegal immigration to the United States is “an unmitigated disaster” that could take “a decade or more” for Democrats to repair from, an analyst says.The Mexican shelters that feed the parole pipeline are often funded and run by people working for American non-profits, Bensman said, In turn, the non-profits are backed by corporate and progressive donors.For example, the business-funded group, Al Otra Lado, helps migrants cross the border via the parole pipeline.The Hollywood-bosted, elite-backed Kids of Need of Defense group also helps migrants get into the parole pipeline.The parole law has been used to let many economic migrants into the United States during 2021 and 2022.Mayorkas and his deputies then used the parole claim to admit roughly 100,000 Ukrainians from safe countries in Europe into the United States.

But officials want rapid results, so they also try to expand the economy by extracting millions of migrants from poor countries to serve as extra workers, consumers, and renters.

The mass migration lobby, with financial ties to billionaire George Soros, is using Russia’s invasion of Ukraine to demand the United States open its borders to refugees from across Eastern Europe

It exploits the poverty of migrants and splits foreign families as it extracts human resources from poor home countries to serve wealthy U.S