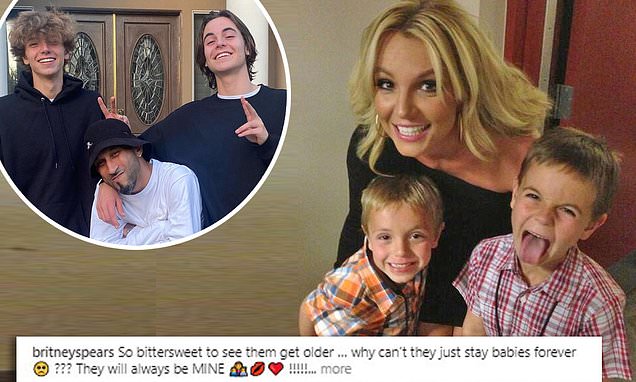 Oct 23, 2021 1 min, 9 secs
She shares two teenage sons with her ex-husband Kevin Federline.But Britney Spears was having trouble accepting that her boys are becoming young men in a sweet Instagram post she shared on Friday!The 39-year-old pop icon was pictured on various trips to the beach with her young boys in the vintage photos as she bemoaned how 'bittersweet' it was to see them growing up.Memories: Britney Spears, 39, posted throwback photos to Instagram on Friday showing her sons Sean, 16, and Jayden, 15, when they were young boys.In one of the photos, Britney was seen carrying one of the boys while she wore a floral-print bikini with a backwards baseball cap and dark sunglasses.Although Britney shared pictures of her sons from when she was still a young mother, her fans recently got a glimpse of how much they've changed.

Earlier this month, the singer's seldom-seen sons were pictured in photos posted to Instagram by their father Kevin Federline's friend, who also shared images of Kevin relaxing .