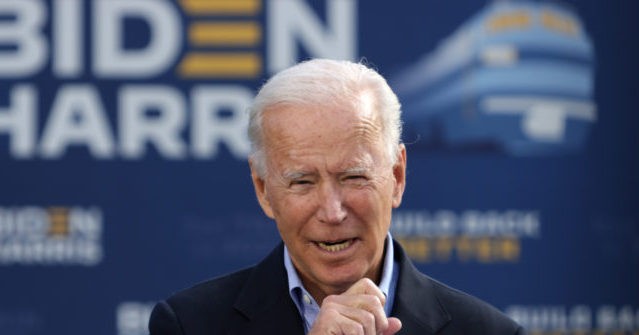 Sep 30, 2020 1 min, 15 secs
Democrat presidential candidate Joe Biden took the stage last night with a simple political task: prove to the American people that he is more than “Basement Joe” — He needed to show that he has the temperament, mental acuity, physical stamina, and strength of character to be president.

He repeated the widespread lie that Trump paid only $750 in taxes in each of the first two years of his presidency.

In fact, Trump paid millions but later claimed he had overpaid and only owed $750 — and that’s according to the New York Times.

Even more bizarrely, Biden went on to claim that Trump was able to avoid taxes because of changes Trump made to the tax code.

“Look, the tax code that put him in a position that he pays less tax than on the money a school teacher makes is because of him,” Biden said.

Biden complained that there were 91 companies on the Fortune 500 who did not pay any taxes last year.

That may be true but a report by the Institute on Taxation and Economic Policy, a left-leaning research group in Washington, found that nearly 40 percent of the Fortune 500 companies it examined paid no taxes in at least one year between 2008 and 2015.

Biden just lied and insisted it was Trump’s fault.

In fact, economic growth was sclerotic in the final year of former President Barack Obama’s reign.

Perhaps Biden will claim that Trump pushed Germany, France, and Japan into a recession.