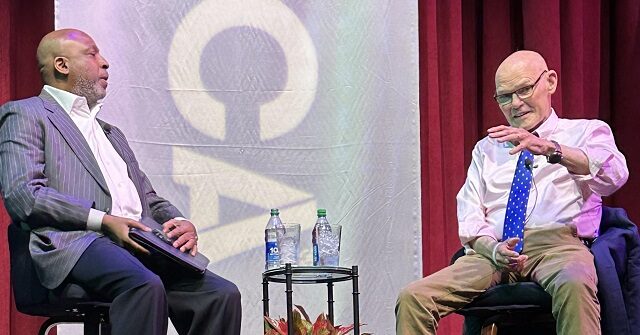 During a talk, part of Alabama-based PARCA’s Speaker Series, held at the Red Mountain Theatre in Birmingham, Carville said he did not expect former President Donald Trump nor  President Joe Biden to be on the 2024 presidential election ballot.“I don’t think Trump or Biden will be on the ballot in 2024,” he said.

“First prediction is within a year, Biden pardons Trump.

Y’all have got to remember something: The entire House elects the Speaker.

According to Carville, Liz Cheney could win the speakership by swaying four Republicans and all of the Democrats if the GOP were to only win the House by a three-member majority

1 California, a Free State Since 1850, May Pay $233k in Reparations per Slavery Descendant

2 Chuck Todd: We Are Seeing 'Beginning of the End of Trump'

7 Exclusive — Louisiana AG Jeff Landry on Media Cartel Bill JCPA: Tell Your Senators ‘Do Not Vote for This’

3 Brendan Fraser speaks about his son Griffin, 20, having autism and obesity - Daily Mail

9 A New Satellite Is One of The Brightest Objects in The Sky, And It's a Big Problem - ScienceAlert

11 Holder: Hunter Biden should be treated "like any other American" in federal probe

12 How loud is the world’s most powerful rocket? - Deseret News

16 Will Smith: Rihanna ‘Could Not Get Over’ the Cinematography of ‘Emancipation’ - Yahoo Entertainment