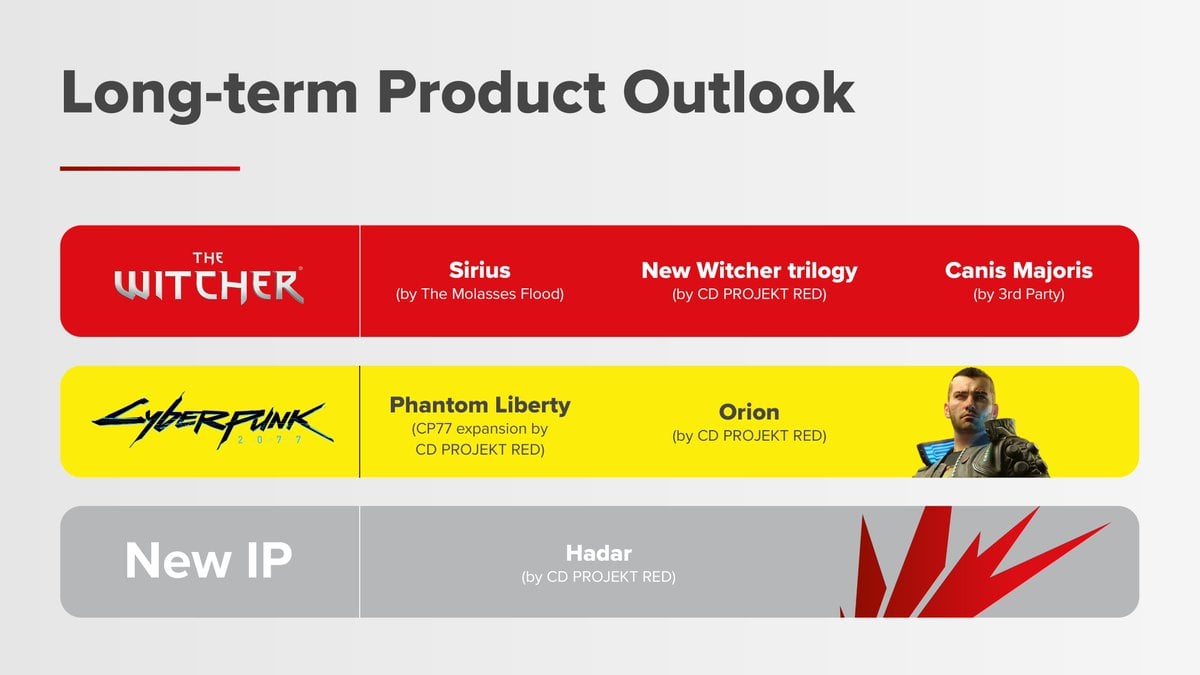 The first three releases in our pipeline will belong to The Witcher franchise, and we’ve already started pre-production of two of them,” said CD Projekt RED president and Joint CEO Adam Kicinski.

“The Molasses Flood game, codenamed ‘Sirius,’ is set in the Witcher universe and is being created with support from CD Projekt RED developers.New Witcher Trilogy (by CD Projekt RED).“Another project, codenamed ‘Polaris,’ is the game which opens the new Witcher saga, further expands upon the open world storytelling known from The Witcher 3: Wild Hunt.

It will be created by an external studio that Michal just spoke about, headed by experienced developers who have worked on earlier Witcher games.

■ Cyberpunk 2077.Phantom Liberty (Cyberpunk 2077 Expansion by CD Projekt RED).“This year we plan to release […] a major expansion for Cyberpunk 2077, titled ‘Phantom Liberty.’.“Another project that we want to focus on is Orion, again it’s a codename, the next Cyberpunk game that will fully unleash the potential that this universe offers.“I am excited to announce that CD Projekt RED has begun creative exploration on a third, entirely distinct IP—codenamed ‘Hadar,'” said CD Projekt RED senior vice president of business development Michal Nowakowski.

I’ve been at CD Projekt for almost 30 years and I have seen it go from a handful of passion-driven rebels to an internationally recognized developer of story-driven role playing games loved by millions globally.

Our hugely ambitious strategy has such an inspiring and strong team at the helm, and I deeply believe in our plan to take CD Projekt to new heights

4 FUSER to end all sales, online services on December 19 - Gematsu

10 'It has kind of rocked us': After Walmart shooting, Chesapeake faces all-too-familiar scenes