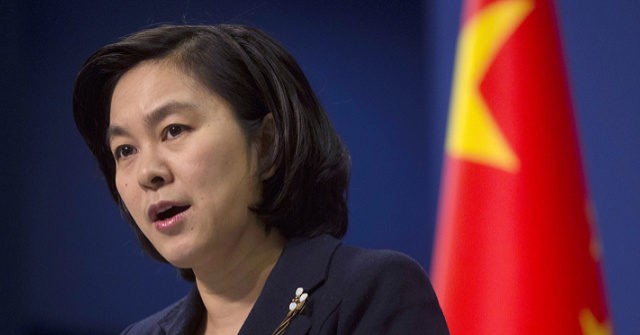 May 11, 2021 1 min, 30 secs
America is “conducting biological warfare and bioterrorism using genetic engineering technology,” China’s state-run Global Times newspaper accused on Monday, citing Foreign Ministry spokeswoman Hua Chunying.Hua reportedly made the comment as part of a larger screed against the United States during her regular press briefing on Monday in response to a question about a report allegedly linking the Chinese military to genetic engineering of coronaviruses.The Australian reported this weekend that it had obtained a leaked document from China allegedly discussing the genetic engineering of coronaviruses by the nation’s military.The Global Times translated Hua’s remarks more pointedly than those appearing in the official Foreign Ministry transcript, attributing to her the claim that America is “conducting biological warfare and bioterrorism using genetic engineering technology.”.In responding to concerns about genetic experiments with coronaviruses in China, Hua also revived the Communist Party conspiracy theory – which she has spearheaded the promotion of at the Foreign Ministry – that the Chinese coronavirus originated in Fort Detrick, a U.S.

Hua suggested in May that the Chinese coronavirus – which first began infecting humans in Wuhan, China, in late 2019 – leaked out of Fort Detrick prior to the first documented cases of the disease and began infecting people in Maryland.

Hua claimed that local doctors incorrectly diagnosed those infected with “coronavirus” with “e-cigarette disease.” E-cigarettes, or “vapes,” have been known to cause lung injuries in some users, many of them traced back to poorly made vapes imported from Shenzhen, China.