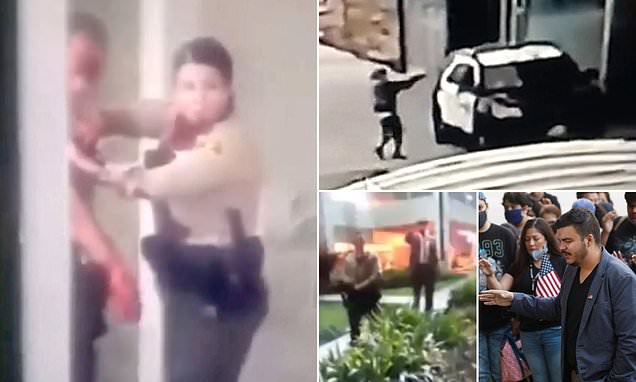 The Compton ambush on two deputies may have been a revenge attack against officers for recent police shootings against black men in LA, according to one report. .

Two Los Angeles County Sheriff's Department deputies - one the 31-year-old mother of a six-year-old boy, the other a 24-year-old man - were ambushed by an unknown man at 7pm on Saturday night while they sat in their patrol car at the Metro Blue Line station at Willowbrook Avenue and Oak Street. .

Fox News reporter William la Jeunesse said Monday: 'Los Angeles police will not say this publicly - but some believe this ambush was retaliation for some recent police shootings of black suspects in LA.' .

On August 31 black man Dijon Kizzee was shot and killed by Los Angeles County sheriff's deputies after he was stopped for a traffic violation while riding a bike.  At the beginning of this month the Los Angeles County Board of Supervisors also voted to ask the coroner to conduct an inquest into the fatal deputy shooting of 18-year-old Andres Guardado on June 18.   .

Officials have asked for the public's help in identifying the gunman with a $175,000 reward for information leading to an arrest. Investigators are still working to determine the motive for the shooting, which they said occurred 'without warning or provocation'. .

Video released by the Los Angeles Sheriff's Department shows the moment the male suspect opened fire on two deputies at a Compton bus station before fleeing on foot.

'That was a cowardly act,' Sheriff Villanueva said at a press conference. 'The two deputies were doing their job, minding their own business, watching out for the safety of the people on the train.  .

Protesters blocked the entrance to the hospital where the two Los Angeles sheriff's deputies ambushed in a shooting Saturday are fighting for their lives, chanting: 'We hope they f***ing die'.

After he posted the comment on Instagram, Ometeotl appeared to apologize, saying: 'The shooting of anyone is a wholly unacceptable occurrence in society?

I do not condone the type of violence seen in the shooting of the deputies yesterday in Compton.'      .

On Sunday the LA county sheriffs office tweeted: 'To the protesters blocking the entrance & exit of the HOSPITAL EMERGENCY ROOM yelling 'We hope they die' referring to 2 LA Sheriff's ambushed today in #Compton: DO NOT BLOCK EMERGENCY ENTRIES & EXITS TO THE HOSPITAL.

Joe Biden said: 'This cold-blooded shooting is unconscionable and the perpetrator must be brought to justice