Donald Trump casts vote in Florida as Joe Biden warns of 'dark winter' in U.S. due to pandemic  | CBC News 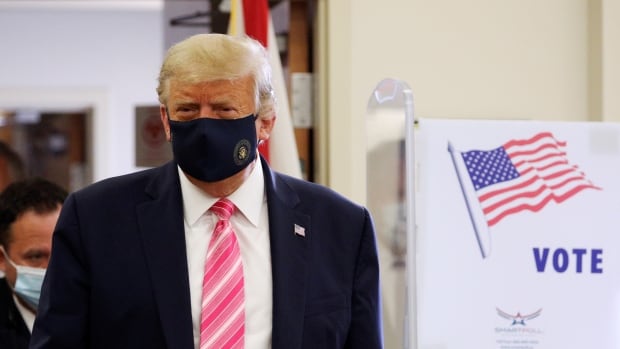 Oct 24, 2020 58 secs
President Donald Trump voted in his adopted home of Florida before hitting the campaign trail for rallies in three swing states on Saturday, joining more than 54 million Americans who have cast early ballots at a record-setting pace ahead of the Nov.

Democratic rival Joe Biden also hit the campaign trail on Saturday, speaking at a drive-in rally of supporters in the battleground state of Pennsylvania, where he warned of a looming "dark winter" unless the Trump administration does a better job at fighting the coronavirus.

With 10 days to go in the campaign, about 54.2 million Americans have already cast early ballots, a pace that could lead to the highest voter turnout in more than a century, according to data from the U.S.

WATCH | Trump and Biden hit the campaign trail in final days before U.S.

Many states have expanded in-person early voting and mail-in ballots as a safer way to vote during the pandemic.

Trump has accused Biden of overstating the health crisis to scare Americans into voting for him.

Opinion polls show Biden leading Trump nationally, but the race is much closer in the battleground states that will decide the election.