Every song The Beatles play in Peter Jackson’s ‘Get Back’ - NME.com 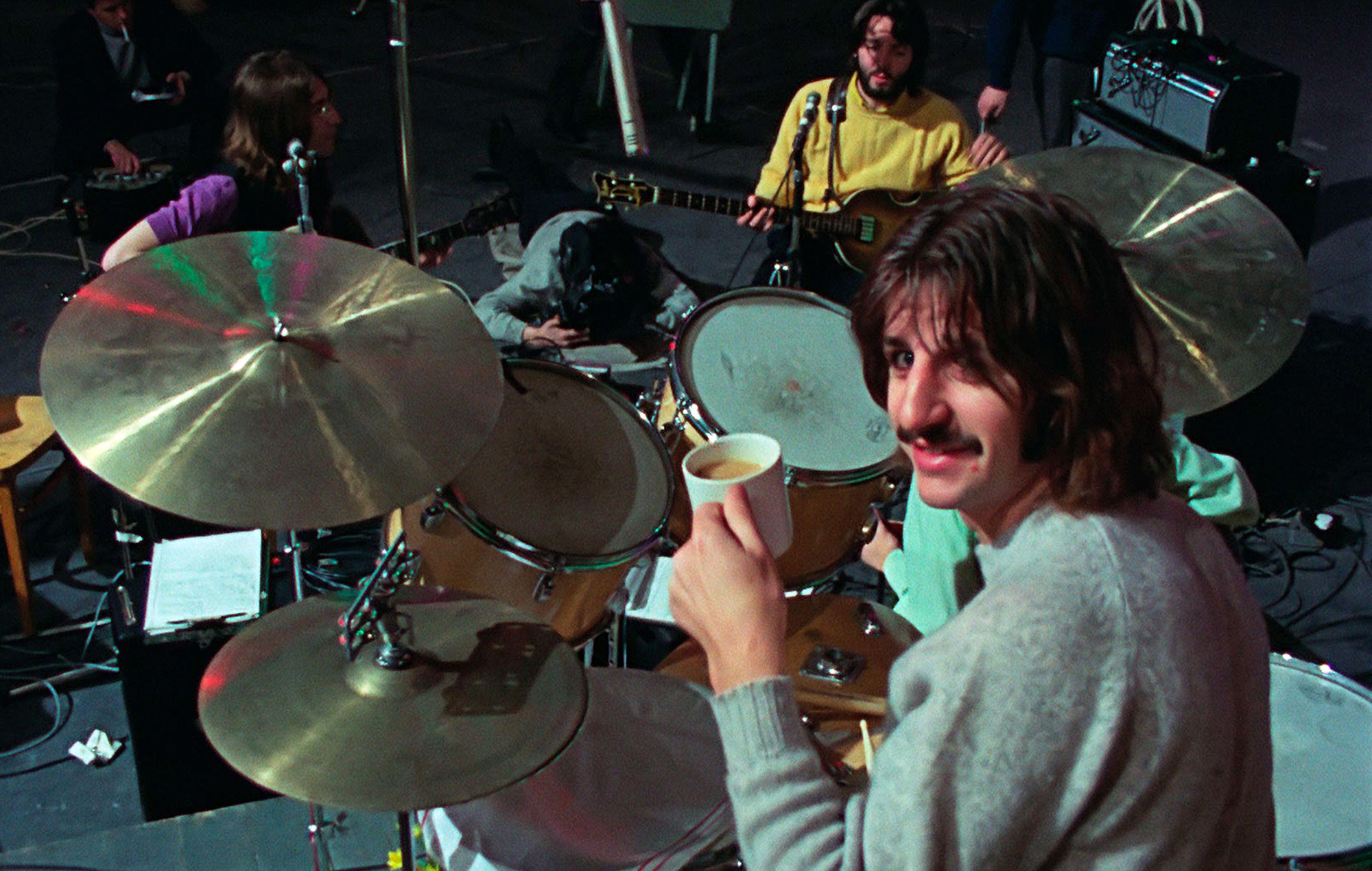 Nov 29, 2021 8 mins, 24 secs
Whether they were kicking back with an old Hamburg rocker, arsing about with ‘Two Of Us’ in comedy voices, jamming along to Yoko’s impressions of childbirth or deciding if songs that would last generations should be dedicated to pomegranates, The Beatles barely stopped playing throughout the Get Back sessions.

Over 400 songs were performed during those few weeks captured for the ‘Let It Be’ film and dusted off by Peter Jackson for his seven-hour Disney+ documentary The Beatles: Get Back, including reworkings of the very first Lennon/McCartney co-writes and a whole heap of songs that would end up on ‘Abbey Road’ or become classics of their individual solo careers.

An early version of Lennon’s solo classic ‘Jealous Guy’ with several differing titles, first heard as John’s warm-up song on day one of sessions.A Lennon song, improvised by the band on day one but never completed.Bluesy Lennon track, a love song to Yoko, which would eventually make the final cut of ‘Let It Be’ and the b-side to ‘Get Back’.

Over the course of the sessions they’d try it in the style of Elvis, Johnny Cash, Little Richard and with Paul shouting “plop-plop-plop!” over the top.

More blues, also bound for the finished record, combining McCartney’s main song with a previously recorded Lennon song called ‘Everybody Had A Hard Year’.A Broadway hit of the ‘20s, given some swing by Paul at the piano as he and a tap-dancing Ringo wait for the others to show up on day two.A steamboat piano ditty Ringo had been working on at home, given a cheery 20-second preview for Paul and George’s amusement.The one track from John and Paul’s skiffle rock past which sparks some interest – “I wrote that when I was about 15,” says John, and it finally gets its day in the sun on ‘Let It Be’.Lennon leads the band through the spy noir theme instrumental, at the end of which George gets an electric shock from his microphone.A moment when the viewer really starts to wonder how great ‘Let It Be’ could have been, Lennon offers one of his greatest solo numbers to the band, previously rehearsed with McCartney and largely mumbled besides a few lines, including “money for rope” and “freaked out, yellow-bellied son of Gary Cooper”.Arguably the most magical moment of the series, Paul writes ‘Get Back’ in a couple of minutes on camera in front of a clapping Ringo and yawning George, thumping chords and mumbling lyrics until it comes together like a magic eye picture.First sung by Paul as he’s imagining the band doing the final gig while being carted out of the Houses Of Parliament by the police, this key moment from the Abbey Road medley goes through the obligatory funny-voice version at Twickenham before coming together (sorry) properly during the Apple HQ sessions.A Lennon masterpiece originating from a sleepless night, post-row with his first wife Cynthia, in 1967, this transcendental cosmic ode was first recorded in 1968 and ended up on a World Wildlife Fund album curated by Spike Milligan.A Hamburg mainstay and the opening song of The Beatles final tour in 1966, revisited roughshod to let off steam on ‘Let It Be’.On camera, George explains how his key ‘Let It Be’ waltz-rocker was inspired by the ballroom scene of a sci-fi TV show he’d watched the previous night.“It’s sort of like The Wizard Of Oz,” personal assistant Mal Evans tells Paul as he writes down the lyrics to his ‘Let It Be’ showstopper.Still alone at the piano as George arrives, delayed by breakfast, Paul also knocks through a “comedy” cowboy blues track destined to become the most rousing moment of the ‘Abbey Road’ medley.An intricate and delicate, almost prog-like instrumental that Paul tries out with George taking to the drums.Reading about Enoch Powell’s anti-immigration rhetoric in the newspapers, Paul leads the band in a satirical, Elvis-aping rock ’n’ roll improvisation in which Powell himself is deported by prime minister Ted Heath and the protagonist leaves the UK for fairer climes only to find that “the Commonwealth is much too common for me”.Big Joe Turner’s blues tune was covered by Beatles favourite Chuck Berry in 1965 and, after an energised thrash through in Get Back, Paul would also record it on the 1999 covers album ‘Run Devil Run’.Written during ‘White Album’ sessions, inspired by a dream Paul had had about his mother, ‘Let It Be’ was first played between takes of ‘Piggies’ in 1968 and rehearsed properly by The Beatles early in the ‘Let It Be’ sessions.After George leaves the band on the seventh day at Twickenham, the remaining members let out their frustrations in a brutal noise jam, with Paul on drums and Yoko primal screaming from George’s seat.While Lennon discusses getting Eric Clapton in to replace George, Yoko takes the opportunity to jump on the piano and improvise a one-word song about Lennon.

4’, ‘Song Of Love’ was toyed with by Paul in comic falsetto during his stint at the piano that morning, and would eventually morph into the opening of ‘Maybe I’m Amazed’, the standout from his 1970 solo album ‘McCartney’.

Fifties crooner homage first demoed by Paul on the final day of shooting at Twickenham, before sessions move to Apple HQ.Seriously taking the piss now, Paul leads the band in an atonal mockery of Bobby Darrin’s classic.According to McCartney’s old exercise books, this was the very first song he and John wrote together, although it falls apart after a few seconds in Get Back.As Ringo heads out of the studio for a “medical”, Paul takes to the kit for a run through of an Arthur Crudup blues made famous by Elvis, and later recorded by Lennon during the ‘Rock ’n’ Roll’ sessions in 1973!

Likely never as drunk as Lennon sounded doing it during the ‘Get Back’ sessions, mind.

John garbles an acerbic version of another song made famous by Elvis, using lyrics from ‘Roll Over Beethoven’, while Paul recites paragraphs from the newspaper article about their split.While John and George sing the praises of Fleetwood Mac, Paul strikes up a verse of Canned Heat’s Woodstock favouriteWhen Billy Preston drops in to the studio, only to find himself recruited to play keys on the album, the band strike up one of their old Hamburg favourites, recorded by The Beatles on ‘Please Please Me’With Paul on drums, Billy Preston on keyboards and John shaking and wrestling feedback from his guitar with whatever comes to hand, Yoko wails along on an experimental freeform psych jam before the rest of the players turn up on day 14, which John suggests putting on the finished albumDuring a spate of wheezy northern pub singer renditions of old Beatles hits including ‘Help!’, Lennon dips into The Beatles’ first number one hit in the UKWhile George experiments with a Hawaiian style slide guitar that has just been brought to the studio, Paul performs a falsetto rendition of the musical hall ditty that will end up as the ‘secret’ extra song at the end of ‘Abbey Road’Written during The Beatles’ visit to Rishikesh in 1968, this folksy number is recorded several times for ‘Let It Be’, with John making do-si-do square dance comments through one version

Another of John and Paul’s earliest joint compositions, the song flows easily on from ‘Maggie Mae’

It was initially recorded in 1958 by Paul, George and John’s band Japage 3

As George makes a psycho-spiritual point about how none of the band had truly discovered themselves at Rishikesh, John kicks into Buck Owens And The Buckaroos’ country tune recorded by The Beatles for ‘Help!’With George Martin stuffing the piano full of newspaper to make it sound like George’s request for a “bad honky-tonk piano” and John on slide guitar, this 12-bar “four-take wonder” inspired by roots blues and George’s stay with Dylan and The Band in Woodstock wound up on ‘Let It Be’ and the b-side of ‘The Long And Winding Road’The first song Paul ever wrote on guitar, aged 14 or 15, just after his mother had died, ‘I Lost My Little Girl’ was his earliest performance piece, although John sings it in Get Back

Playing it briefly during filming for ‘Let It Be’, he’d later demo it for Phil Spector for possible inclusion on ‘All Things Must Pass’ but it would remain unreleased

Ringo’s cheery underwater romp was premiered to the band towards the end of the sessions, where George helped him out with the linking pre-chorus sectionAn improvised jam instigated by George and Billy, which the band would return to several times over the later sessionsA loose jam on the Top Notes’ hit recorded by The Beatles in 1963 swiftly turns into an upbeat ‘Dig It’ featuring Heather channelling Yoko again

In Get Back, John and Paul do the jive along to it

Another Hamburg favourite the band knew from Little Richard’s 1955 version, previously recorded for ‘Beatles For Sale’ in 1964 and revisited as the Apple Studio sessions neared an upbeat conclusionWritten by George on piano rather than guitar, jaunty rocker ‘Old Brown Shoe’ would be released as the b-side to ‘The Ballad Of John And Yoko’ four months after the ‘Let It Be’ sessions