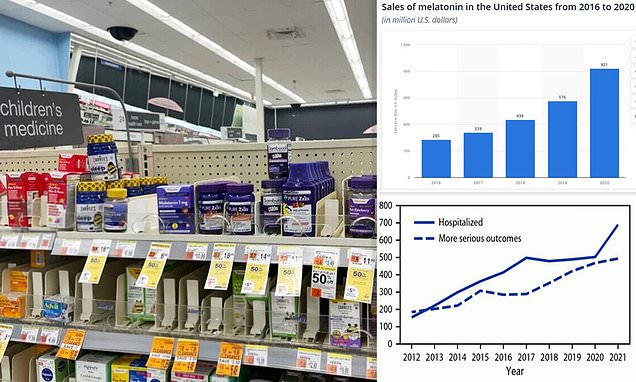 Parents are being warned against giving children melatonin following a surge in accidental poisonings.Pediatric melatonin ingestions reported to poison control across the US between 2012-2021.A store shelf of melatonin supplements formulated for children- Melatonin is one of the most widely used sleep aids in the US- Melatonin content can vary widely by product so parents are urged to use caution

Adeel Rishi, vice chair of the AASM, said: 'The availability of melatonin as gummies or chewable tablets makes it more tempting to give to children and more likely for them to overdose.'

He added: 'Parents should talk directly with their child's health care professional before giving their children melatonin products.'The AASM's warning comes on the heels of a report from the Centers for Disease Control and Prevention (CDC) published in June that said annual pediatric ingestions of melatonin increased 530 per cent from 2012 to 2021, which time there were a total of 260,435 ingestions. Melatonin accounted for nearly 5 per cent of all pediatric poisoning cases in 2021 compared with 0.6 per cent in 2012, and was the most frequently ingested substance among children reported to national poison control centersWhile the vast majority of cases reported to poison control were asymptomatic, around 84 per cent, more severe symptoms involved the gastrointestinal, cardiovascular, or central nervous systems. 'In addition, serotonin, a breakdown product of melatonin, was found in 26 per cent of supplements at potentially clinically significant doses that can increase the risk for serotonin toxicity in children,' the CDC reported.

13 The Internet Is Warning People Not To Brush Their Teeth After Oral Sex, So I Went To An Expert For The Truth - BuzzFeed

16 8000 living with AIDS in Trinidad and Tobago - TT Newsday

3 Which diet is best for me? DailyMail.com weighs the pros and cons of seven top fad diets - Daily Mail

6 Hailey Bieber attends an Art Basel party in Miami... after revealing she has cyst on her ovaries - Daily Mail

10 Queen Elizabeth Had Cancer Before She Died, New Book Claims - The Daily Beast

14 Schizophrenia: What to know about this complex mental health diagnosis - USA TODAY