Frozen in horror: Notes from inside the Parkland school massacre site - CNN

Frozen in horror: Notes from inside the Parkland school massacre site - CNN 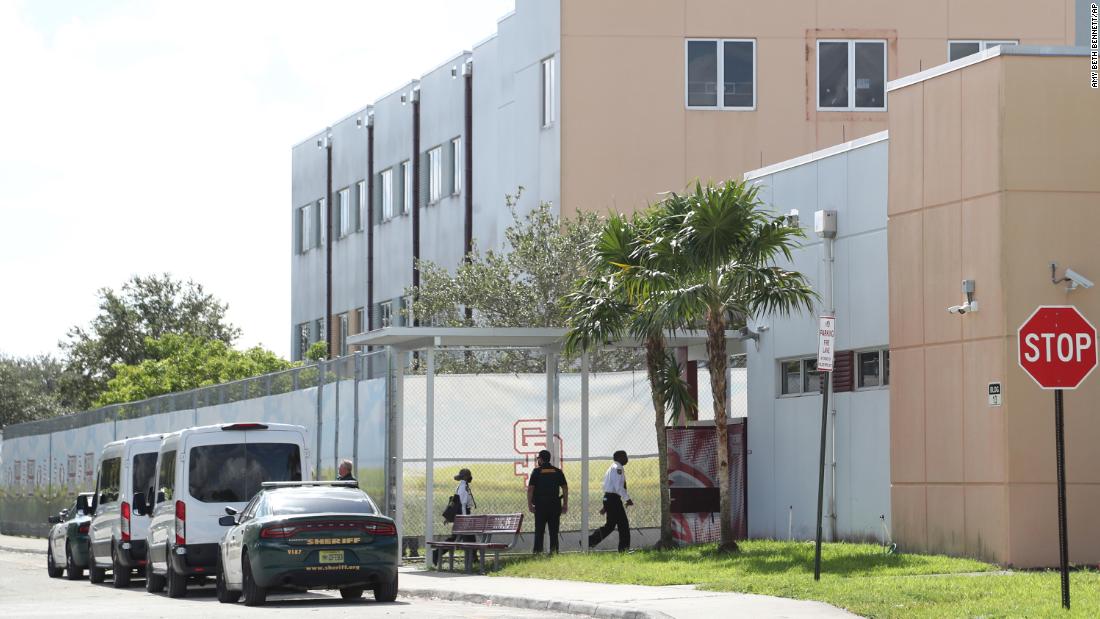 On Thursday, jurors in the sentencing phase of the school shooter's trial walked through the undisturbed scene, where the blood of the victims still stains classroom floors.Bullet holes also mark the walls of the Parkland, Florida, school where Nikolas Cruz killed 14 students and three staff members.In the stairwell where Cruz entered and assembled his gun, a stuffed white teddy bear lay dirtied on the floor next to a bag with Valentine's Hearts on it, probably dropped by a fleeing student. Everywhere you walk throughout the building there are shards of broken safety glass that crunch loudly as you walk over them.

On a desk a Valentine's Day card that reads "I don't just like you, I really, really like you."

ROOM 1215 Study Hall led by Spanish teacher Juletta Matlock: There is dried blood outside the door where Luke Hoyer, Martin Duque and Gina Montalto were killed.

ROOM 1213 -- Ronit Reoven's AP Psychology class:On the far wall away from the door is a table with a large pool of blood.

In front of the desk where Maddy Wilford lay wounded, the teacher's desk phone lay on the floor.

On the walls behind the desk are photos of what appears to be the teacher's family and a 8 X 10 drawing of President Trump with the saying "We will win in everything we do." On the north wall is a bulletin board with about two dozen wallet size photos of students.

There is a large bloodstain on the floor and on the wall.

A blue folder with Alaina Petty's name still on the desk - right behind that - between teacher's desk and the wall is a large bloodstain.

Right next to the bloodstain on the floor where Alyssa Alhadeff and Alaina Petty died - is a handwritten paper about Malala Yousafzai - "the girl who wanted to go to school" - the paper goes on to say "a bullet went straight to her head but not her brain" ending with "In conclusion, we the people should have freedom for education." (Note: Malala is the Pakistani girl who was shot by the Taliban - she has fought to advocate for education access for girls and women). At Alex Schachter's desk - a bloodstain on other side of silver bar that connects the plastic seat to the desk. SECOND FLOOR - HALLWAY QUOTES Quote on hallway between rooms 1221 and 1229 "Dream as if you'll live forever, live as if you'll die today." -James Dean Further down the hallway it reads: "Never live in the past but always Lear form it." - anonymous Room 1230 A large heart shaped box of Valentine's Day chocolates on a desk. Room 1231Clustered Desks "Class of 2018" photos of students in casual settings (not formal pics). THIRD FLOOR Room 1256, Scott Beigel's classroom: Entering the hallway from the east side stairs, the first thing you see is a pool of caked blood that's much smaller than others. Room 1255, Stacey Lippel's classroom: The door is pushed open -- like others to signify that Cruz shot into it -- and a "No Bully Zone" hangs on the inside.

The creative writing assignment for the day is written on the whiteboard: "How to write the perfect love letter."

The teacher's desk is to the left and one can imagine students huddled behind it.

There's a large pool of blood in the middle of the third-floor hallway where Anthony Borges was injured.

A pool of blood is observed in the alcove outside 1249 where Pollack and Loughran died.

There's a large pool of blood and holes from bullets that were fired at him at close range.

The corner of a heart-shaped paper Valentine's Day decoration (perhaps was a card) is collapsed, presumably was drenched with blood

Moving down the hall toward the west wall, bullets scraped against the south walls, an indication that Cruz was aiming for the fleeing students and not just randomly firing ahead of him. We see the corner in front of the stairwell where Peter Wang fell after being shot as he ran down the hallway.

Pin-sized holes in the wall have circles drawn around them and are marked "fragment D" and "fragment F."

There are six bullet holes in the window above where Wang died.

5 Mars is littered with 15,694 pounds of human trash from 50 years of robotic exploration - Yahoo! Voices