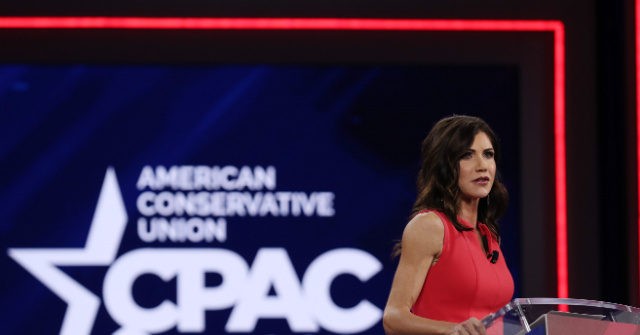 Feb 28, 2021 1 min, 31 secs
“I think the main question that needs to be answered this weekend is: Why does America need conservatives? The question of why America needs conservatives can be answered by just mentioning a single year.“Everybody knows that almost overnight, we went from a roaring economy to a tragic nationwide shutdown,” Noem continued, pointing out certain economic factors that impacted Americans:.According to Noem, Government “crushed the economy,” not the coronavirus.Noem also took aim at the media for its role in the economic disparities waged against the American people throughout the coronavirus pandemic.In addition to the media’s role, Noem also blasted New York Gov.Regarding her remarks on Cuomo, Noem highlighted the nursing home controversy that resulted in numerous deaths across the state.Noem then expounded on the importance of the conservative movement, telling those in attendance why America needs conservatives:.

But we also need conservatives at the highest level of government too.

In America, we have government of, by, and for the people.

And the people of individual states crafted their own constitutions that place specific limits on the role of government.

And no governor should arrest, ticket, or fine people for exercising their freedoms.” She continued:.

We the People have consented to a government that will serve all of us equally.“We should illustrate to the world that people thrive when government is limited, and people’s ingenuity and creativity are unleashed,” she added.“Make no mistake about it — conservatives exist to fight for America, and for every American,” she emphasized.

People used personal responsibility to protect their families’ health and way of life, while the government respected their rights and freedom. And we are working together to create new opportunities and a better future for our kids.

We took the American path. Let me close with this