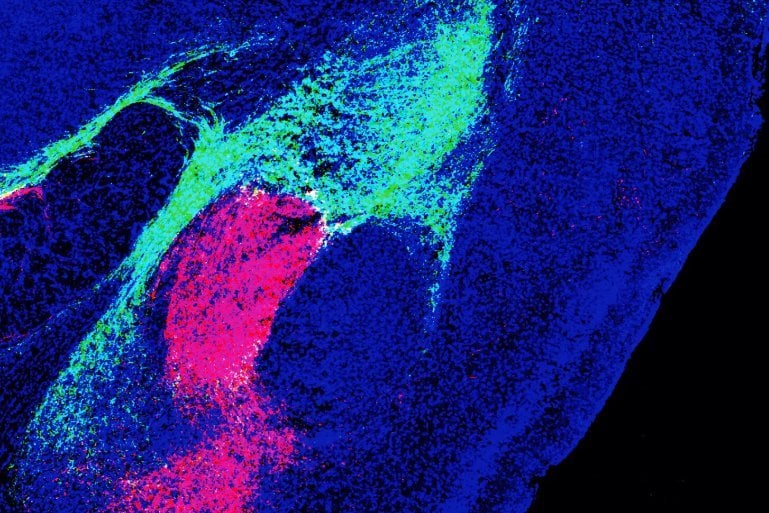 Previous research also showed that the amygdala, which initiates behavioral responses and forms fear memories to environmental and emotional stimuli, receives heavy input from brain regions that are laden with a chemical associated with aversion, the neuropeptide CGRP (calcitonin gene-related peptide).“Based on these two pools of research, we proposed that CGRP neurons, found especially in subregions of the thalamus and the brainstem, relay multisensory threat information to the amygdala,” says co-first author Shijia Liu, a graduate student in the Han lab.

“Drugs that block CGRP have been used to treat migraines, so I’m hoping that our study can be an anchor to use this kind of drug in relieving threat memories in PTSD, or sensory hypersensitivity in autism, too.”.

Yet little is known about whether and how multi-sensory innate threat cues are integrated and conveyed from each sensory modality to the amygdala, a critical brain area for threat perception and learningHere, we report that neurons expressing calcitonin gene-related peptide (CGRP) in the parvocellular subparafascicular nucleus in the thalamus and external lateral parabrachial nucleus in the brainstem respond to multi-sensory threat cues from various sensory modalities and relay negative valence to the lateral and central amygdala, respectivelyBoth CGRP populations and their amygdala projections are required for multi-sensory threat perception and aversive memory formation

12 'The tools are getting picked off': An ever-mutating mix of COVID variants means fewer and less effective treatments this fall - Fortune

14 Millions of Americans will save on Medicare fees next year