How Trump allies stoked the flames ahead of Capitol riot 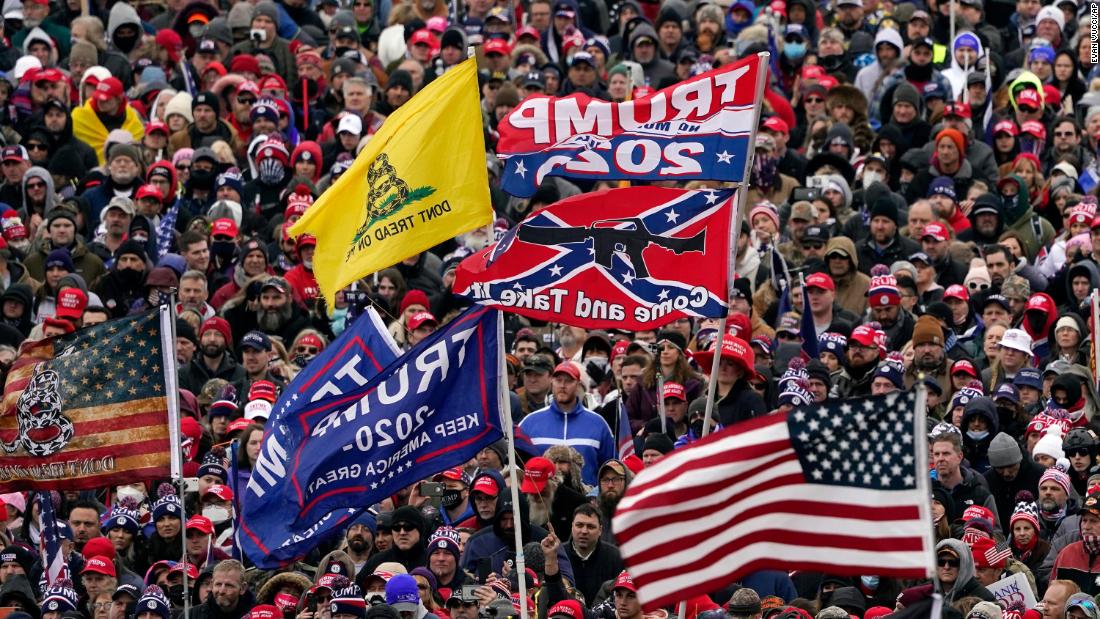 Jan 19, 2021 5 mins, 22 secs
As 2020 faded into 2021, some of President Donald Trump's most influential supporters -- among them members of his inner circle who were in direct contact with the President -- spoke in ominous and violent terms about what was coming on January 6.Even as anxious eyes turn toward the Inauguration Day on January 20, the words of these firebrands in the leadup to the riots at the Capitol raise crucial questions about the relationship between the rhetoric of far-right figureheads and the violence that unfolded on January 6."All hell is going to break loose tomorrow," Bannon, Trump's former top White House adviser, promised listeners of his podcast -- called "War Room" -- on January 5.The next day, Trump himself gave a rambling speech near the White House where he claimed the election "was stolen from you, from me and from the country," and called on supporters to "walk down to the Capitol.""We are going to cheer on our brave senators and congressmen and women," he added, "and we are probably not going to be cheering so much for some of them because you will never take back our country with weakness." Soon after, a mob of Trump supporters stormed the US Capitol, killing a police officer and assaulting others before charging inside -- some carrying weapons and zip-tie handcuffs."What we have is influential, powerful people influencing the President and pushing out messages that are radicalizing large chunks of the population," said Heidi Beirich, chief strategy officer for the Global Project Against Hate and Extremism, a nonprofit organization that monitors extremism around the world.

And we haven't really experienced that in our history."

Trump has already paid a historic price for his words, with the US House on Wednesday voting to make him the only American president to have been impeached twice -- this time for "incitement of insurrection." But while much attention has been paid to Trump's words in the run up to the breach of the US Capitol, less talked about is the fiery rhetoric of his most high-profile champions.Bannon and Giuliani did not respond to requests for comment.

Stone rejected CNN's questions as "defamatory attempts to say that my belief in God and my view of the last election in apocalyptic terms is somehow inciting violence." Alexander argued he had "no involvement in the breach of the US Capitol."

Flynn attorney Sidney Powell, who herself is facing a defamation lawsuit over her claims about the election (she's denied the allegations), insisted that Flynn "encourages patriotism and lawful political action," and to suggest otherwise is "absolutely ludicrous."Bannon's menacing metaphorsIn the weeks between the election and that day, Bannon and his guests and co-hosts on his "War Room" podcast relentlessly promoted conspiracy theories of election fraud and cast the fight to overturn the election results in war-like and often apocalyptic terms.Bannon's menacing metaphors first landed him in hot water a few days after on Election Day, when he suggested in a video that posted to several of his social media accounts that, if he were in charge, he wouldn't merely fire FBI Director Christopher Wray and Anthony Fauci -- the US government's top infectious disease expert -- but would put their heads on pikes "as a warning to federal bureaucrats." Twitter permanently suspended his account.In December, Bannon's co-host tweeted a video of Bannon speaking on "War Room" overlaid with cinematic music and dramatic images from the famous D-Day battle scene of "Saving Private Ryan." In it, he spoke of the "moral obligation" Trump supporters have to "the kids that died at Normandy." He added that if they allow Biden -- "that feckless old man" -- to win, "I want you to explain that to the 20-year-old kid in the first wave on D-Day."On December 28, Bannon insisted that patriotic Trump supporters had to be ready to fight in the spirit of George Washington's soldiers during the American Revolution and American soldiers on D-Day in World War II.

"You and me were talking almost every day, many times, you know, 10 times a day," Trump campaign adviser Boris Epshteyn said to Bannon on December 28.

Meanwhile, a senior Trump adviser confirmed that the President and Bannon have been in communication in recent weeks, discussing Trump's conspiracy theories about the election.'You either fight with us or you get slashed'Just before Christmas, Alexander -- a political activist who has organized pro-Trump rallies, including one of the demonstrations that converged on the Capitol lawn on January 6 -- used violent metaphors to hint at what was to come in January when speaking to followers of his livestream channel on the social media platform Periscope.

So I'll let you guys know more about what that means as we evolve."

Alexander has helped turn the "Stop the Steal" slogan that Stone launched on Trump's behalf during the 2016 primaries into a rallying cry for conservatives around the country.At a DC rally on the night of January 5, Stone took the stage clad in one of his trademark pinstripe suits as a dance track titled "Roger Stone did nothing wrong" blared from the speakers.After repeating the falsehood that the election was stolen from Trump, Stone, 68, rallied the faithful with an us-versus-them battle cry.

Speaking to a fired-up crowd at the DC rally on January 5, Flynn -- who was pardoned by Trump in November after he pleaded guilty to lying to the FBI about his conversations with a Russian diplomat -- managed to pack election-fraud conspiracy theories, violent innuendo and a call to action into a couple of sentences.

"Their subsequent attack on the Capitol was nothing short of an attempted coup, intended to prevent the peaceful transition of power."

Experts concerned that incitement is far from overJohn Scott-Railton, a researcher at University of Toronto's Citizen Lab who now works with others to identify extremist groups who were part of the Capitol mob, said the rhetoric plays into the fantasies of armed protesters who have been gunning for a civil war."They're ready -- it's what they've been prancing around in the woods, playing dress up, preparing for," he said.

"When I'm talking to people on the ground, that is what I'm hearing over and over and over again, it has nothing to do with President Trump's words."