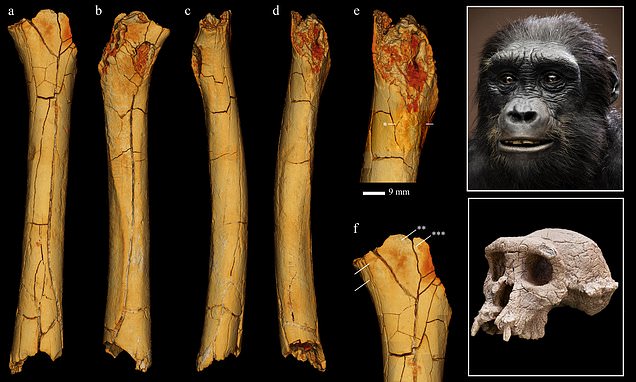 Nov 21, 2020 1 min, 17 secs
Researchers are basing their claim on the shape of a femur that they say belongs to Toumai.They maintain the thigh bone, which resembles an ape's, was intentionally left unexamined because it would have discredited the theory he walked on two feet. .French paleontologist Michel Brunet discovered remains belonging to Sahelanthropus tchadensis in northern Chad in 2001. Brunet maintains the creature, dubbed 'Toumai,' walked on two legs more than 6 million years ago and is humanity's oldest known ancestor.Brunet maintains the base of Tumai's skull shows it would have rested on an erect spine.

But doubts about whether Sahelanthropus was bipedal have only grown with the release of a new report suggesting the creature's femur shows it walked on all fours, like an ape.

That makes Toumai more than twice as old as humanity's oldest known ancestor, 'Lucy,' discovered in Ethiopia in 1974 and dating to about 3.2 million years ago. .A left femur and two forearm bones were also discovered, but for some reason Brunet never published anything on them and few other researchers had access to the bones.Aude Bergeret-Medina, a researcher at Poitiers, identified an unlabeled bone as Tumai's femur and said it's more typical of an ape.

Macchiarelli claims Brunet blocked access to the actual femur because it would discredit the theory Toumai walked on two legs.