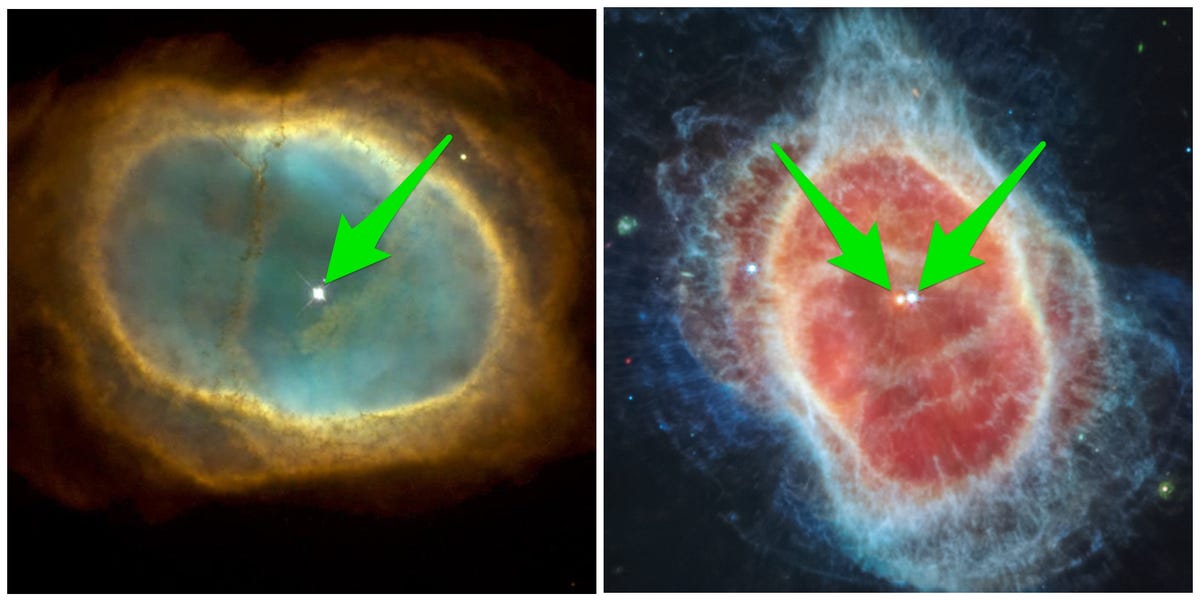 Before Webb, astronomers had another workhorse cosmic observatory: the Hubble Space Telescope.

Hubble sees ultraviolet light, visible light, and a small slice of infrared, while Webb looks at the universe across the infrared spectrum.

When compared to Hubble's images of the gas giant, above on the left, Webb offers a sharper and crisper image, and showcases new details of Jupiter's auroras and storm systems.

By gathering infrared light, Webb is able to peer through those layers of dust, giving astronomers unprecedented views of the nebula's various components.

When comparing the two images next to one another, Webb's camera pierces through solid columns of cosmic dust, revealing hundreds of stars that Hubble couldn't see.

One of the first images that NASA shared from Webb was a "deep field" image — a long-exposure observation of a region of the sky, which allows the telescope to capture the light of extremely faint, distant objects."The deep field image fills me with wonder and hope," Lisa Kaltenegger, professor of astronomy at Cornell University and director of the Carl Sagan Institute, previously told Insider.A side-by-side of Hubble's deep field next to Webb's reveals just how much sharper and stronger the new space observatory is.The Webb image also reveals new galaxies far in the background, which weren't visible to Hubble.Dan Coe, a researcher with the Space Telescope Science Institute, first discovered this object in deep space about 10 years ago, using Hubble.

1 I'm a leg-lengthening surgeon. Most of my clients are men with confidence issues — here's what the procedure's like - msnNOW

5 A 24-year-old says she 'ignored' her bloating and stomach pain until it got so bad she went to the ER. Doctors diagnosed her with ovarian cancer. - Yahoo! Voices

2 The "boring" iPhone won! Not buying an Android phone ever again - unless it can fold in half - PhoneArena