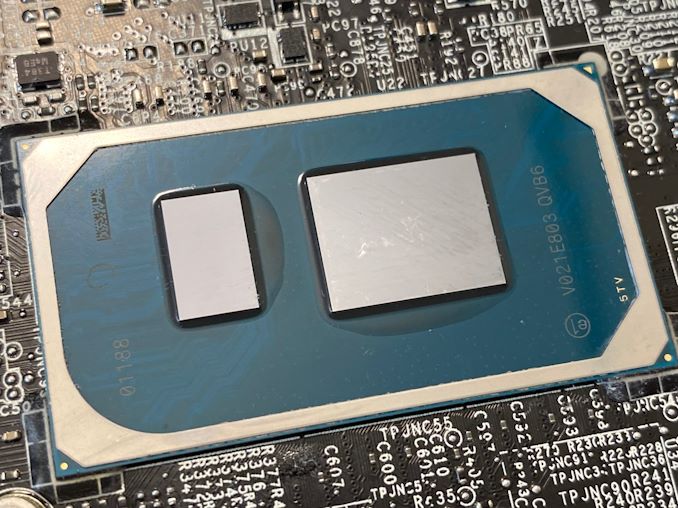 For this reference design, it has been built to offer both, so in effect it is more like a 28 W design for peak performance as to avoid any thermal issues.

The turbo budget for the system increases with the thermal design point of the processor, and so when in 28 W mode, it will also turbo for longer.

This is immediately and painfully laughable – PCIe 4.0 x4 enabled drives, built on Phison’s E16 controller, have been in the market for six months.

The real reason why this system doesn’t have a PCIe 4.0 x4 drive is because the E16 drives are too power hungry.

If Intel had said that ‘current PCIe 4.0 x4 drives on the market aren’t suitable due to the high power consumption of current solutions, however future drives will be much more suitable’, I would have agreed with them as a valid reason for not using one in the reference design.

Beyond all this, by the time Tiger Lake notebooks come to market, new drives built on Phison’s E18 and Samsung’s Elpis PCIe 4.0 controllers are likely to be available.

Normal operation on a notebook is for the processor to be offered at a specific thermal design point, and any changes to the power plan in the operating system will affect how long the system uses its turbo mode, or requirements to enter higher power states.

This is because most notebooks are built to be optimized around that single thermal design point.

In our Ice Lake development system (and in a few select OEM designs, like the Razer Stealth), the power slider while in the ‘Balanced’ power mode allowed us to choose between a 15 W power mode and a 25 W power mode, adjusting the base frequency (and subsequently the turbo budget) of the processor.

The chassis was built for the higher power modes, and it allowed anyone using the development system to see the effect of the performance between the two thermal design points.

For our Tiger Lake reference design, we have a similar adjustment at play.

The power slider can choose either 15 W mode or 28 W mode (note that this is different to the 12 W to 28 W mode that Intel’s Tiger Lake is meant to offer, which I found odd for leaving out, but good in the sense that we could do 15W to 15W comparisons).

However for our Tiger Lake system it has been enabled - at least in the 28 W mode anyway.

Technically Adaptix could be enabled at any thermal design point, even at 12 W, but in all cases it should offer better performance in line with what the chassis can provide and the OEM feels safe.

It still remains an OEM-enabled optimization tool, and Intel believes that the 28 W with Adaptix mode on the reference design should showcase Tiger Lake in its best light.

For the power consumption part of the coverage, I’m going to cover it into two brackets: how Intel compares to its own previous generation at 15 W, then moving onto the difference between a 15 W Tiger Lake and a 28 W Tiger Lake, which is going to be a running theme throughout this review.

In Intel’s own announcement for Tiger Lake, the company pitted the 28 W version of Tiger Lake against the best power and thermal setting on an AMD 15 W processor; we’re going to see if those performance comparisons actually hold water, or if it’s simply a diversionary tactic to show Intel has the upper hand by using almost 2x the power