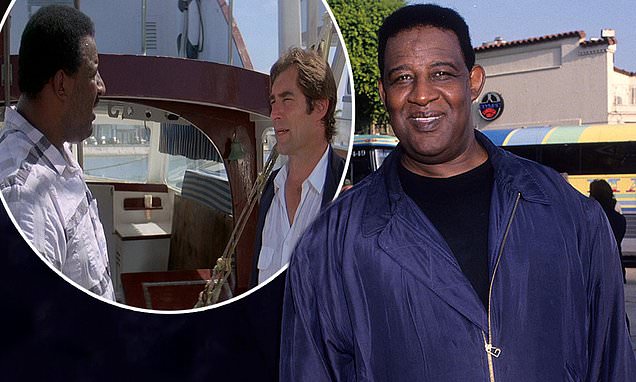 May 06, 2021 59 secs
James Bond star Frank McRae has died at the age of 80.Screen star Frank was best known for his role as the famous spy's friend Sharkey in 1989's Licence to Kill and previously played defensive tackle for the Chicago Bears and the Los Angeles Rams in the 60s. .James Bond's official Twitter account paid tribute on Thursday, writing: 'We are sorry to hear that Frank McRae, who played Sharkey in Licence To Kill, has passed away!Fans of the film star shared their condolences on social media, writing: 'R.I.P the irreplaceable Frank McRae - 1944 - 2021. Such a wonderful actor who elevated every scene & movie he appeared in.Biggest role: The screen star was best known as the famous spy's friend Sharkey in 1989's Licence to Kill (pictured with 007 Timothy Dalton).Heartbreaking: The actor passed away from a heart attack in Santa Monica on April 29, his daughter-in-law confirmed (pictured in Paradise Alley in 1978).'Sad to hear Frank McRae has passed away.

His character Sharkey was one of the highlights of Licence to Kill; charismatic and provided great comic relief.