Lie down on your right side to absorb drugs better, new research suggests - Daily Mail

Lie down on your right side to absorb drugs better, new research suggests - Daily Mail 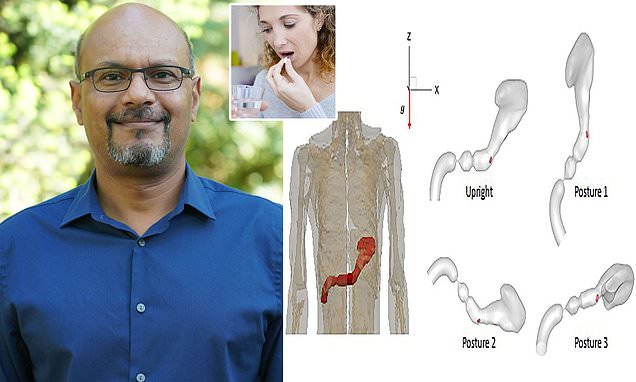 Scientists say swallowing tablets is the most complex way for the human body to absorb an active pharmaceutical ingredient because the bioavailability of the drug in the gastrointestinal tract depends on the medication's ingredients and the stomach's dynamic physiological environment.A new study has found posture affects how the stomach absorbs drugs and lying on your right side speeds up the effects of a drug.'When the pill reaches the stomach, the motion of the stomach walls and the flow of contents inside determine the rate at which it dissolves'However, current experimental or clinical procedures for assessing the dissolution of oral drugs are limited in their ability to study this, which makes it a challenge to understand how the dissolution is affected in different stomach disorders, such as gastroparesis, which slows down the emptying of the stomach.'He said the stomach's contents and gastric fluid dynamics are among factors that play a role in a drug's bioavailability, and stomach contractions can induce pressure and generate complex pill trajectoriesProf Mittal added: 'This results in varying rates of pill dissolution and non-uniform emptying of the drug into the duodenum and, sometimes, gastric dumping in the case of modified-release dosage

9 American chess star accused of cheating by rival has likely done so in more than 100 games, report claims