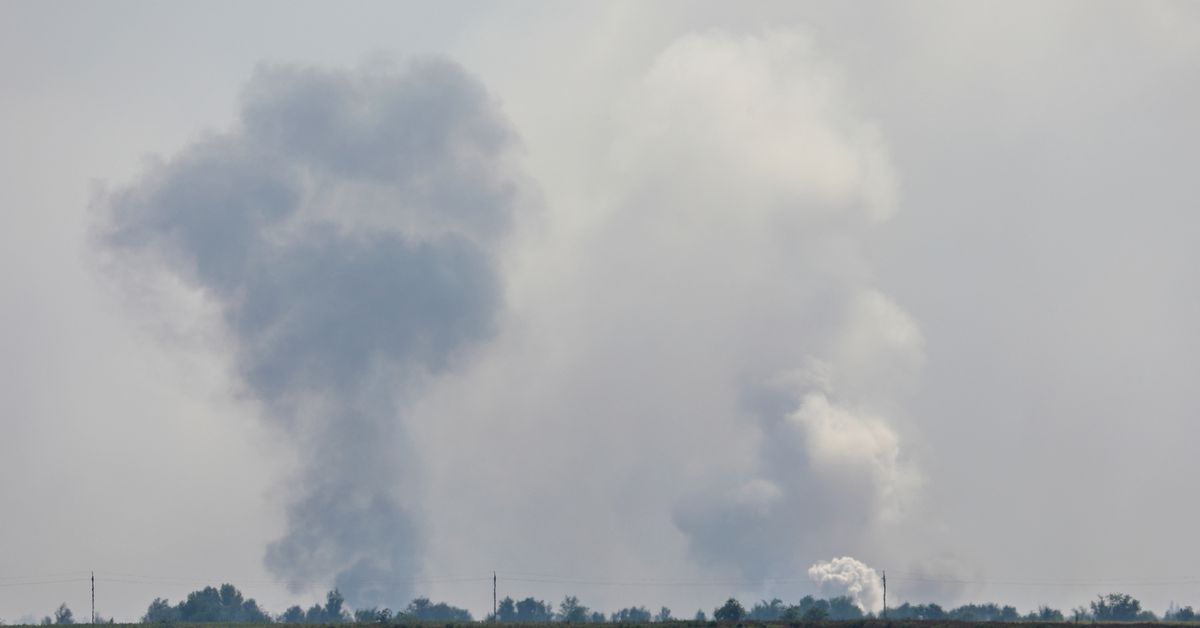 KYIV, Aug 16 (Reuters) - Explosions rocked an ammunition depot and disrupted trains in Russian-annexed Crimea on Tuesday, the latest such incident in a region Moscow uses as a supply line for its war in Ukraine.Moscow's senior representative in the region, Sergei Aksyonov, confirmed that two people were wounded, railway traffic halted and about 2,000 people evacuated from a village near the military depot - but he skirted talk of a cause.The Crimean peninsula on the Black Sea, which Russia seized from Ukraine in 2014 in a move unrecognised by most countries, is the base of Russia's Black Sea Fleet and popular in the summer as a holiday resort.Last week, blasts at a military air base on Crimea's western coast caused extensive damage and destroyed several Russian war planes.Russia's RIA news agency said seven passenger trains had been delayed and that rail traffic on part of the line in northern Crimea had been suspended.

That could disrupt its ability to support troops in Ukraine with military hardware.

On Tuesday, Ukrainian presidential adviser Mykhailo Podolyak tweeted cryptically: "A reminder: Crimea (as a) normal country is about the Black Sea, mountains, recreation and tourism, but Crimea occupied by Russians is about warehouse explosions and high risk of death for invaders and thieves.Like the air base, the ammunition depot is out of range of the main rockets Western countries acknowledge giving Ukraine, raising the prospect that it has acquired new capability.

24, attention has also focused in recent days on shelling in the vicinity of the Zaporizhzhia nuclear plant in southern Ukraine.

Any mission undertaken by the U.N.'s nuclear agency to inspect Ukraine's Zaporizhzhia plant cannot pass through the capital Kyiv as it is too dangerous, a senior Russian diplomat was quoted by Russian news agencies as saying on Tuesday.

5 The Love Horoscope For Each Zodiac Sign On Tuesday, September 27, 2022 - YourTango

7 Kevin Feige Reveals Why Chadwick Boseman’s T’Challa Was Not Recast In ‘Wakanda Forever’: “It Was Much Too Soon” - Deadline

15 Warner Bros. Really Wants You To Know That Gotham Knights Will Look Great On PC - Kotaku