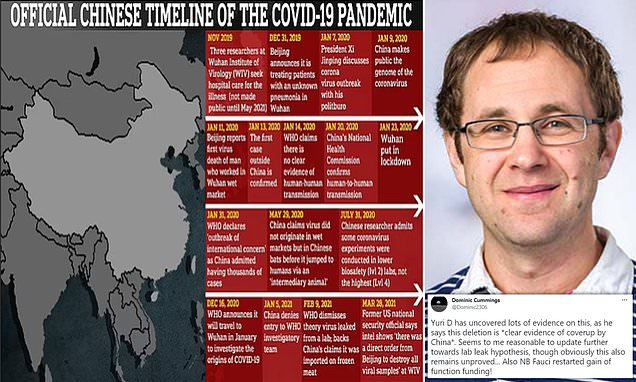 Jun 23, 2021 2 mins, 58 secs
Professor Jesse Bloom found dozens of test samples from the earliest confirmed Covid patients in epicentre Wuhan had been pulled by Chinese scientists from an international database.Dozens of test samples from patients in epicentre Wuhan were found to have been wiped from an international database used to track the virus' evolution.  .The American professor who spotted their deletion and managed to recover some of the data said they suggested Covid was circulating long before China's official timeline.He found the early samples of the virus were more evolved than would be expected of a pathogen that had recently jumped from animals to humans — but did not say it gave more weight to the 'lab leak' theory.Boris Johnson's former chief aide Dominic Cummings said Professor Bloom's find pointed further 'towards' the 'lab leak' theory. .The samples were published as part of a study into diagnosing Covid patients using PCR tests – just days before the Chinese Government issued an order requiring approval of the publication of all coronavirus data. .The professor explained scientists can get their genetic samples removed from the NIH's database with relative ease, normally via an email request.He said that while there were often legitimate and valid reasons for having them deleted, there was no evidence of any in the case of the Wuhan samples.In a tweet this morning, Boris Johnson's former chief aide Dominic Cummings said Professor Bloom's find pointed further 'towards' the 'lab leak' theory.The Wuhan Institute of Virology at the centre of the Covid-19 lab leak theory has been nominated for China's top science award for its work during the pandemic.A description posted by the Chinese Academy of Sciences said it had carried out 'comprehensive' research into Covid that have laid the foundation for scientists around the world to study the virus.The nomination comes despite growing speculation that the virus did not occur naturally but escaped from the lab located just a few miles away from the Wuhan wet market where the outbreak was first identified.  .In a Twitter thread detailing his findings today, Professor Bloom said: 'Although events that led to emergence of #SARSCoV2 in Wuhan are unclear (zoonosis vs lab accident), everyone agrees deep ancestors are coronaviruses from bats. .Asked about what the findings reveal about the origins of the virus, Professor Young said: 'It doesn't tell you where the virus came from.'But he added that it 'raises suspicions' and will fuel the the theory that it might have emerged from the Wuhan Institute of Virology, which many have suggestedThe study was shared by former No10 aide Mr Cummings today who said evidence was moving 'towards' the China lab leak theory. However, he stressed that the idea was still 'unproven'.  The Prime Minister has said that the government's central theory is that the virus was 'zoonotic' in origin, and jumped to humans from another speciesBritish scientist Peter Daszak has been removed from the COVID commission looking at the origins of the pandemic after helping secretly denounce the lab leak theory while failing to mention his close ties to the same facilityThe head of the World Health Organization insisted just a day earlier that the theory that Covid emerged from a Wuhan lab has not been ruled out – as he said China should help solve the mystery out of 'respect' for the dead.  There has been mounting controversy over how the virus first emerged - whether through animal contact at a 'wet' market in Wuhan or leakage from a highly secure research laboratory in the same city as some have suggested.
source :- Daily Mail
1. Covid vaccine set to be offered to 16 and 17-year-olds - BBC News Aug 04, 2021 # health 1 min, 40 secs 2. Covid Shots Targeting Delta May Be Needed, Researchers Say - NDTV Aug 04, 2021 # health 48 secs 3. All 4 Hawaii mayors are considering vaccine mandates for county workers - Hawaii News Now Aug 04, 2021 # health 36 secs 4. Startling Discovery Suggests 40% of Wild Deer in The US Have Had The Coronavirus - ScienceAlert Aug 04, 2021 # health 55 secs 5. 1 Death of a Local in Their 30's, 31 New Cases Reported Today; Public Asked to Reconsider Gatherings – Redheaded Blackbelt - Redheaded Blackbelt Aug 04, 2021 # health 45 secs 6. Fully Vaccinated Still at Considerable Risk of Getting COVID, Giant UK Study Shows - ScienceAlert Aug 04, 2021 # health 22 secs 7. South Bay resident ID’d as first 2021 case of West Nile virus reported in L.A. County - KTLA Los Angeles Aug 04, 2021 # health 52 secs 8. SLO County health officials report two new COVID-19 deaths, rise in cases and hospitalizations - KSBY San Luis Obispo News Aug 04, 2021 # health 14 secs 9. Ohio’s unvaccinated: The counties still lagging behind as delta variant surges - WJW FOX 8 News Cleveland Aug 04, 2021 # health 44 secs 10. Hospitals push forward with vaccine requirements despite Oregon law preventing them from doing so - KGW.com Aug 04, 2021 # health 46 secs 11. Respiratory infection affecting small children makes an early appearance - The Boston Globe Aug 03, 2021 # health 1 min, 38 secs 12. COVID-19 level in Bexar County increases from ‘low’ to ‘severe’ and ‘worsening’ in one month - KSAT San Antonio Aug 03, 2021 # health 45 secs 13. 34 New COVID-19 Community Cases In Tuolumne County - MyMotherLode.com Aug 03, 2021 # health 57 secs 14. Vaccination stops half of Delta infections, community survey shows - Financial Times Aug 03, 2021 # health 9 secs 15. COVID-19 transmission increases in much of Mass., CDC data shows - WCVB Boston Aug 03, 2021 # health 28 secs 16. J&J Covid vaccine recipients can get supplemental Pfizer or Moderna dose in San Francisco - CNBC Aug 03, 2021 # health 1 min, 14 secs