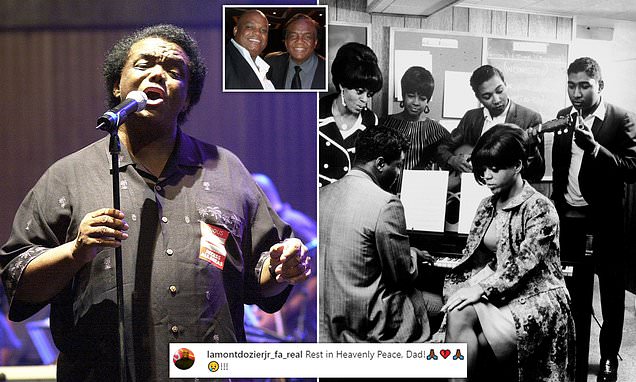 Motown songwriter Lamont Dozier dies aged 81, pictured in New York in 1990 .The songwriting genius, behind classics such as 'Baby Love' and 'Two Hearts', has passed away, his son Lamont Dozier Jr confirmed on Instagram.'The great Lamont Dozier.Lamont was one third of the iconic songwriting trio Holland-Dozier-Holland, who are known for co-writing huge hits for Motown acts such as The Four Tops, The Supremes and The Isley Brothers.Holland-Dozier-Holland penned and produced more than 200 songs, with their tenure at Motown between 1962 and 1967 helping to define the sound. .From left to right is pictured Diana Ross, Lamont Dozier (at piano), Mary Wilson, Eddie Holland, Florence Ballard (seated) and Brian Holland in the Motown studio circa 1965 in Detroit.Lamont Dozier at Air Studio in Montserrat Various.There, Lamont met Brian and Eddie Holland, the beginnings of the now world-famous writing-producing team.President Hollywood Chamber of Commerce Leron Gubler, Eddie Holland, Lamont Dozier, Brian Holland, Songwriter Stevie Wonder, Record Producer Berry Gordy, Singer Mary Wilson and Councilman Tom LaBonge attend The Hollywood Walk of Fame ceremony honoring Brian Holland, Lamont Dozier And Eddie Holland at Hollywood Walk Of Fame on February 13, 2015.Lamont Dozier, Boy George and producer Stewart Levine at Air Studios in the Carribbean island of Montserrat Various.Lamont and siblings Eddie and Brian Holland would get their first string of hits with The Vandellas' 'Come and Get These Memories' and 'Heatwave' in 1963

1 Asteroid-smash aftermath: Why Europe is sending a probe to DART-battered Dimorphos - Space.com

3 System76's Pop!_OS COSMIC Desktop To Make Use Of Iced Rust Toolkit Rather Than GTK - Phoronix

11 US starts fiscal year with record $31 trillion in debt