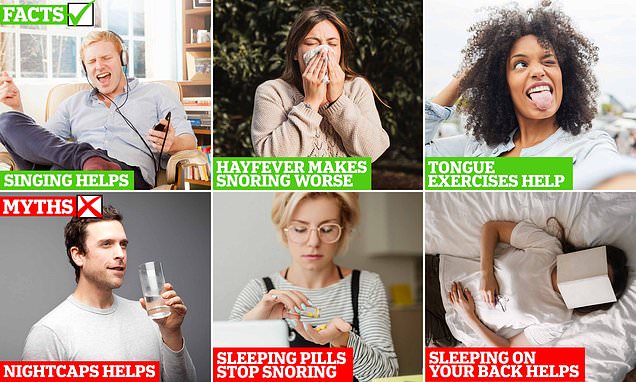 Whether you're on the receiving end of it or the one responsible, snoring is the cause of bad sleep, exhaustion the next day and arguments with your partner who is also feeling irritable and bleary-eyed after a disturbed night. .A new study has found that sleep apnoea, of which snoring is a symptom, is more common in post-menopausal women because they have lower levels of the hormones oestrogen and progesterone. .The same study raised hope that Hormone Replacement Therapy (HRT) could reduce snoring.Around one in 20 post-menopausal women suffer from obstructive sleep apnoea, a condition causing the airway to collapse which can cause loud snoring and wake someone up to 40 times a night.These are the hormone which are replaced when women have HRT, raising hopes it could help with snoring and sleep apnoea.The study found that the snoring and other symptoms of sleep apnoea diminished when the hormones were replenished to a pre-menopausal levels. .Researchers revealed in a 2013 study that a simple set of exercises can dramatically reduce snoring in patients.The research, which was published in the journal CHEST, found that in patients with primary snoring or mild OSA, oropharyngeal, or mouth and tongue, exercises significantly reduced the frequency of snoring by 36 percent and total power of snoring by 59 per cent'This study demonstrates a promising, noninvasive treatment for large populations suffering from snoring, the snorers and their bed partners, that are largely omitted from research and treatment,' Barbara Phillips, the Medical Director of the Sleep Laboratory at the University of Kentucky College of Medicine, said at the time. A study carried out by the Royal Devon and Exeter Hospital found that singing can be used to reduce the risk of snoringA study published by the Journal of Sexual Medecine found that 69 per cent of male participants diagnosed with sleep apnoea also had Erectile dysfunction. While the scientists were not able to find a clear reason as to why snoring could lead to erectile dysfunction, they suggested that sleep apnoea could cause a dip in testosterone levels in men, and deplete their oxygen levels too, which are both needed to produce erections. As people living with hay fever will know, this allergic reaction to pollen can cause an itchy throat, mouth, nose and ears and sneezing. This is because, breathing through the mouth when you are sleeping can cause your tongue falls farther back, can cause compressions on your throat from the lowered jaw and a dried throat. However, there is no indication that a tipple before bed will help with your snoringWhen you are dehydrated, the mucus in the mouth and throat can thicken, which can cause surfaces to stick together and lead to snoring. Not only will these pill make you more likely to snore, it is also believe they could worsen the underlying condition behind the snoring, sleep apnoea, and make it a common occurrence. On top of the snoring, it is thought that sleeping pills could bring on the more severe sides of sleep apnoea, which include: exhaustion during the day, impaired memory, depression, high blood pressure and diabetes.  Sleeping on your back is associated with some health benefits, but it is unlikely to help reduce your snoringIt is believed sleeping on your back helps with the spine, but it also means that your tongue is more likely to fall back into your mouth and obstruct your airways, which is likely to trigger sleep apnoea. A GP is also likely to prescribe a series of lifestyle changes before recommending surgery, because sleep apnoea and snoring can also be caused by hygiene, a posture issue or gravity.

5 Asteroid 2.3 times the size of dinosaur heading for Earth - NASA - The Jerusalem Post

7 An 'extreme heat belt' will impact over 100 million Americans in the next 30 years, study finds

10 Fuel prices may be easing, but grocery costs are up the most since 1979