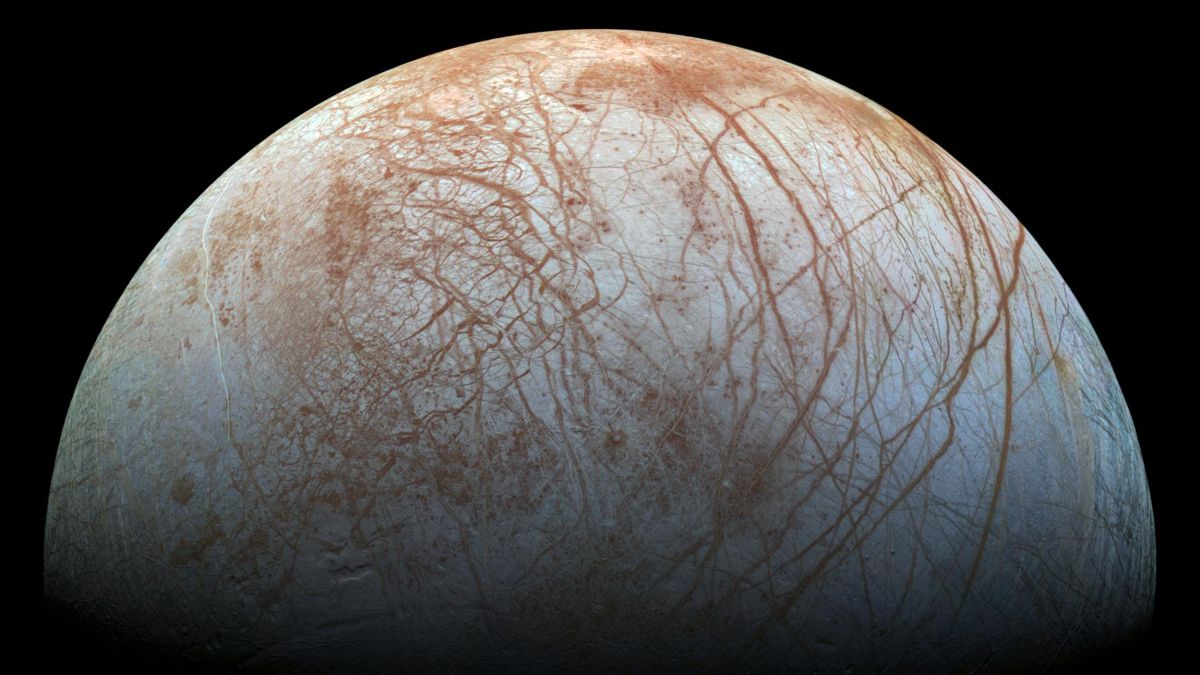 29, NASA's Juno probe will perform the closest flyby of Jupiter's icy moon Europa in over 20 years as the spacecraft embarks on a mission to probe deep into Europa's ice in search of pockets of liquid water.

Although Juno won't be able to tell us whether Europa harbors alien life, it will teach us more about the moon's icy crust, such as how thick it is and whether there are any subsurface pockets of liquid water that could reach the surface.

Related: Jupiter's Ganymede, the largest moon in the solar system, looks amazing in these 1st photos from NASA's epic Juno flyby.Juno's work at Europa is considered a "scouting mission" for NASA's forthcoming Europa Clipper mission, Scott Bolton, associate vice president of the Southwest Research Institute Space Science and Engineering Division and principal investigator for the Juno mission, told Space.com.Related: Chaos reigns in detailed new views of Jupiter's icy moon Europa.One theory is that pockets of water can form in the subsurface, either through liquid convectively rising up through the ice shell, or by the ice in the shell melting, perhaps as a result of stresses placed on it by Jupiter's gravitational tides."When we were developing Juno, we didn't really think about going close to the icy satellites; we were completely focused on Jupiter," Bolton said.

In 2013, the Hubble Space Telescope detected plume-shaped clouds of hydrogen and oxygen (which, when combined, make water) and, in 2016, saw the possible silhouette of these plumes. Scientists perusing archived data from the Galileo spacecraft found that it had measured subtle perturbations in Jupiter's magnetosphere close to Europa that could be the result of charged particles in the plume deflecting the giant planet's magnetic field. .

Still, even if Juno doesn't spot a plume in action, the spacecraft might see a geological feature on the surface that's emitting water vapor, analogous to the "tiger stripes" on Saturn's icy moon Enceladus that release their own water geysers. Alternatively, Juno's navigation cameras will hunt for icy particles drifting back down to Europa's surface, reflecting and scattering light..Juno's polar orbit around Jupiter, flying over the north pole and then the south pole, means that it will approach Europa from a high inclination, giving the spacecraft views of the polar regions of the moon for the first time. In contrast, previous missions hugged the plane of the moons and focused on their equatorial regions. Juno's orbit also means that this is the only chance the spacecraft will get to observe Europa up close..Juno crossed Jupiter's equator at the distance of Ganymede — 665,000 miles, 1.07 million km) in the summer of 2021.

Meanwhile, the European Space Agency's Jupiter Icy moons Explorer (JUICE) will launch in April 2023, for arrival at Jupiter in July 2031, on a mission to study Europa, Ganymede and Callisto

1 'Pale blue dots' like Earth may be rare among habitable worlds - Space.com

8 Missing element for life may be present in ocean of Saturn's moon Enceladus - Space.com

11 When is October's partial solar eclipse and who can see it? - Space.com

14 'House of the Dragon' star Olivia Cooke says she had a 'full mental breakdown' at age 22: 'It was bad' - Yahoo Life