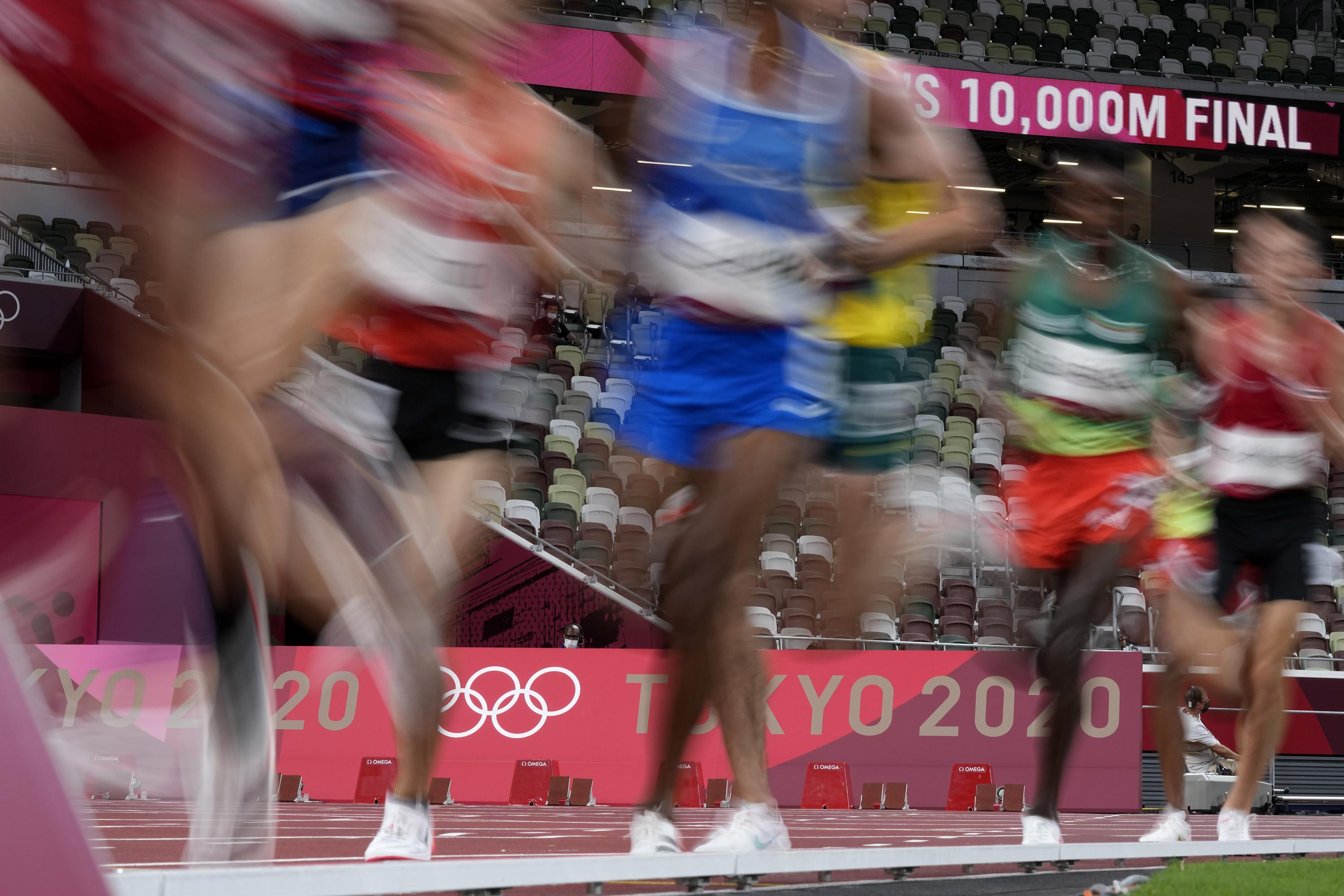 Jul 30, 2021 5 mins, 3 secs
TOKYO (AP) — The Latest on the Tokyo Olympics, which are taking place under heavy restrictions after a year’s delay because of the coronavirus pandemic:.Selemon Barega of Ethiopia won the first track and field gold medal of the Tokyo Olympics with victory in the men’s 10,000 meters.The New Zealand team of Marcus Daniell and Michael Venus took bronze by beating Austin Krajicek and Tennys Sandgren of the United States 7-6 (3), 6-2.Japan became the first Asian nation to win Olympic gold in men’s épée team fencing by beating the Russian team 45-36.No team from outside Europe had made the podium since Cuba at the 2000 Sydney Games.Emma McKeon of Australia is the fastest qualifier in the women’s 50-meter freestyle heats at the Tokyo Olympics.Fiji has had a hand in knocking two of the top three teams from 2016 out of the Tokyo Games.

swimmer Michael Andrew didn’t wear a mask when he stopped to talk to reporters behind the scenes at the Tokyo Olympics.

Lukáš Krpálek has claimed his second Olympic gold medal in judo for the Czech Republic, winning the talent-stacked men’s heavyweight division with an ippon victory over Georgia’s Guram Tushishvili in the final at the Budokan.French star Teddy Riner’s quest for a record-tying third consecutive Olympic gold medal ended in the quarterfinals with a narrow loss to Russian athlete Tamerlan Bashaev, who then lost a spectacularly well-fought semifinal to Krpálek.

He claimed bronze with a victory over Hisayoshi Hasagawa, who became only the third of host Japan’s 14 Olympic judokas not to win a medal.

The top-ranked Serb lost to Alexander Zverev of Germany 1-6, 3-6, 6-1 in the semifinals of the Tokyo Olympics tennis tournament.

Zverev’s opponent in the gold-medal match will be Karen Khachanov of the Russian Olympic Committee.Heavyweight Akira Sone has won Japan’s ninth gold medal in judo at the Tokyo Olympics.Iryna Kindzerska of Azerbaijan and France’s Romane Dicko won bronze for their first Olympic medals.The Russian Olympic Committee has issued a punchy statement hitting back at other athletes’ criticism of the Russian team’s presence in Tokyo following years of doping revelations.Russia was rebranded as ROC for the Tokyo Olympics and next year’s Winter Olympics in Beijing as part of sanctions for failing to turn over accurate data from the Moscow anti-doping laboratory.The ROC says “yes, we are here at the Olympic Games.Transgender weightlifter Laurel Hubbard has thanked the International Olympic Committee for helping to make it possible for her to compete at the Tokyo Games.In comments provided by the New Zealand Olympic Committee, Hubbard says “the Olympic Games are a global celebration of our hopes, our ideals and our values.Hubbard has been a focus for support and criticism since qualifying for the Tokyo Olympics.China’s Shi Tingmao and Wang Han have finished 1-2 in the preliminaries of Olympic women’s 3-meter springboard diving.

They have won 3-meter gold at every Olympics since the 1984 Los Angeles Games, a winning streak that covers the last eight Olympics.

An San of South Korea has won her third straight archery gold medal at the Tokyo Games.An beat Elena Osipova of ROC, the acronym for the Russian Olympic Committee, by a 6-5 score Friday.

An had a part in the mixed and women’s team gold medals as well, with the men’s team also winning.

The South Koreans have now earned gold in the women’s individual in nine of the last 10 Olympics.

Fields was injured in a violent crash on the first lap of his qualifying heat the Tokyo Olympics.Many are wondering if China can use Tokyo to return to its past dominance in the sport, which was shaken at the Rio Games, where several top players lost early.

women’s water polo captain Maggie Steffens broke the Olympic scoring record with a goal in the third period against the Russian Olympic Committee.

Women’s water polo was first introduced to the Olympic program for the 2000 Sydney Games.The 28-year-old Steffens is going for her third consecutive gold medal at the Tokyo Games.The two medals for the Chinese pushed their total to 13 since the sport was introduced at the 2000 Olympics in Sydney, far and away the most in the discipline.Russian shooter Vitalina Batsarashkina has won her second gold and third medal of the Tokyo Olympics, beating Korea’s Kim Minjung in a shoot-off in women’s 25-meter pistol.Three athletes who tested positive for COVID-19 are among the 27 new cases announced by Tokyo Olympics organizersThree of the 27 cases were residents of the Olympic Village, including Kendricks, another athlete and a team official or coach — the latter two were not identifiedIOC spokesman Mark Adams cites the governor of Tokyo, Yuriko Koike, and Japan’s prime minister, Yoshihide Suga, saying the increase in cases was not linked to staging the Olympics during a state of emergencyAmerican backstroke star Ryan Murphy suggested that his Olympic races were “probably not clean,” seeming to take aim at Russian swimmers who beat him in two events

Three days ago, he settled for bronze in the 100 back, touching after both Rylov and another Russian, Kliment Kolesnikov