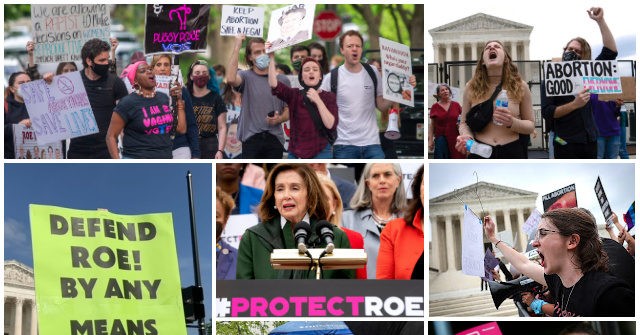 May 22, 2022 3 mins, 29 secs
That was the case on May 12, when Scarborough commented on the Senate’s vote, the previous day, on an abortion bill spearheaded by Majority Leader Chuck Schumer (D-NY).  That bill failed by a 49:51 vote.  In other words, Schumer couldn’t even get a majority in his own chamber—Sen.House Speaker Nancy Pelosi, joined by House Democrats and pro-abortion activists, speaks at a press conference about the leaked Supreme Court draft decision overturning Roe v.In fact, pro-abortion sentiment in the Democratic Party is so strong that more moderate rhetoric and argumentation is being pushed aside. As pro-life activist Gloria Purvis points out, Planned Parenthood now regards “pro-choice” as obsolete, and is now happy with saying, “pro-abortion…abortion isn’t a dirty word.”  Taking their cue, abortion crusaders in Congress no longer say that they are “pro-choice.”.At the very same time that they are going all out in favor of abortion, Democrats are getting rid of another moderate word: “woman.”.Yes, it seems like a joke, and yet by now we’ve all heard the joke—Democrats can’t or won’t define “woman,” because they’re afraid of offending the transgenders.  And this includes the newest Supreme Court justice, Ketanji Brown Jackson, who seemed to erase half the human race—including herself—when she said that only a biologist could correctly define “woman.”?Amusingly, the bill that just lost was less radical than earlier versions, which made references to “white supremacy” and “gender oppression,” while extending abortion protections to “transgender men, non-binary individuals, those who identify with a different gender, and others.” (If you think I’m making this up, have a look for yourself.)  It’s worth noting that this crazy bill passed in the House in 2021, with 218 Democrats voting for it.

And in the Senate, 46 Democrats voted for it.

In fact, it’s not just Joe Scarborough trying to warn Democrats against flying off into the twilight zone.  Just prior to the May 11 vote, NBC News added this warning in its “First Read” tipsheet:?Senate Democrats are headed for a show vote on abortion that risks dividing their party, depressing their base, and looks all but certain to be defeated?And another Democrat, Matt Yglesias, tweeted: “Traditionally, the majority leader seeks to hold votes on message bills that unite his caucus and divide the opposition.  But Chuck Schumer doesn’t roll that way and believes in dividing his own caucus while uniting the opposition and somehow Democrats think this is good?”.

But Chuck Schumer doesn't roll that way and believes in dividing his own caucus while uniting the opposition and somehow Democrats think this is good.

Wade at the hands of the Supreme Court, the Democratic Left is on high alert.  Unfortunately, that high alert doesn’t seem to be too centered on what most American voters would actually support.  With the enthusiastic support of the Democratic Left, Chuck Schumer had the Senate vote on a bill that would effectively have legalized abortion throughout all nine months of pregnancy (perhaps a third of Americans support legal third trimester abortions).

So now election-minded Democrats—including Scarborough, NBC News, Yglesias, and Teixeira—are seeing the headlights coming at their party.  And the collision could come on the apparent pending Supreme Court decision on Roe, which seems destined to ignite a disharmonic convergence of leftist passions in favor of redefining women and elevating transgenderism.?Still, political optics matter, and so now Democrats fear that pro-abortion activists will continue to threaten Supreme Court justices, and their families, in their homes.  In response, Bill Maher, normally sympathetic to Democrats, exclaimed on his HBO show, “It’s wrong!In fact, The Washington Post, always looking out for Democratic fortunes, ran this advisory headline: “Some Democrats warn abortion rights demonstrators not to go overboard.”  And finally, 16 long days after the Supreme Court leak, Attorney General Merrick Garland declared that violence was “unacceptable.”  (Still, given the Democrats’ soft stance on crime, who can say for sure how tough the Biden administration will be?–let’s pray that we don’t have to find out.).So can Democrats keep themselves under control?  Will their outrage spill over into bad optics