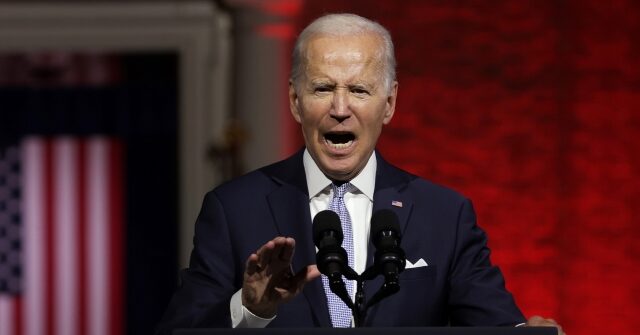 Americans believe President Biden is focusing on so-called threats from MAGA Republicans in order to avoid important issues such as inflation and immigration, and most are more concerned about the socialist left than MAGA Republicans, a Harvard CAPS-Harris Poll released this week found.“Donald Trump and the MAGA Republicans represent an extremism that threatens the very foundations of our republic,” Biden said during the divisive and dark speech, deeming former President Donald Trump and his followers a “threat to this country.”.The survey asked, “Do you think that the president Biden is fairly raising issues around MAGA Republicans or is the President trying to avoid talking about inflation, immigration, crime and other issues?” Overall, 59 percent said they believe Biden is simply attempting to avoid talking about key issues, compared to 41 percent who said he is “fairly raising MAGA Republican issues.”

4 Joe Biden: Mass Immigration Is Making America 'So Much Better'

10 Exclusive — McCarthy: ‘Every Means Possible’ on Table for GOP to Roll Biden with Leverage

6 In the final trailer for Paramount Pictures' Smile, the widest grins cut the deepest - The A.V. Club

8 Ahead of Overwatch 2, a eulogy for the Overwatch I once knew - Gamesradar

9 Giants' first-round picks can only get better after dismal showing vs. Cowboys - New York Post

14 Hillary and Chelsea Clinton on How Their Family Fueled Right-Wing Media: ‘We Were the Reason That Fox News Was Created’ - Yahoo Entertainment