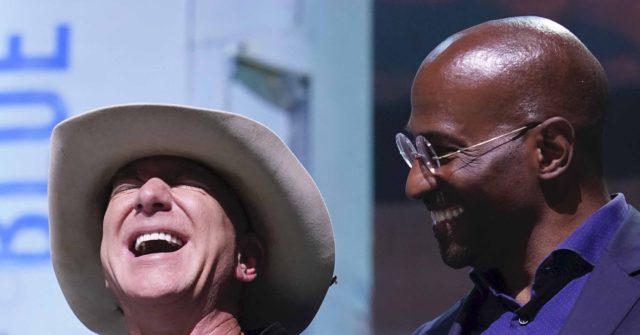 Jul 21, 2021 1 min, 7 secs
Amazon.com founder Jeff Bezos followed a familiar pattern when he gave $100 million to left-wing radical Van Jones on Tuesday: America’s billionaire elite continues to fund the activists who want to destroy the system that made them rich.

Rather, it will fund Jones’s “charities” — left-wing political groups operating as non-profits.

Despite the $100 million charitable gift, Jones will continue to push for higher taxes for corporations like Amazon, which paid net zero in federal taxes in 2018.Monopolies like Amazon, and super-rich investors like Bezos, don’t mind higher tax rates.

Amazon has already given $10 million to Black Lives Matter — a donation announced in June 2020, as violent mobs in major cities were looting the few remaining brick-and-mortar, mom-and-pop stores that Amazon had not yet displaced.As Breitbart News Editor-in-Chief Alex Marlow revealed in his book, Breaking the News: Exposing the Establishment Media’s Hidden Deals and Secret Corruption, that donation is tied to a domestic terrorist:.And when Bezos, and Amazon, look for allies in the fight — when they look for the patriotic, freedom-loving, small-government opposition that has protected capitalism from its enemies — they will find none willing, or able, to fight.