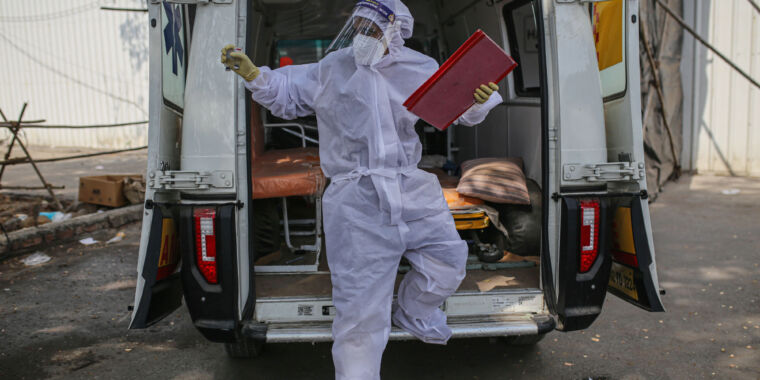 May 11, 2021 1 min, 17 secs
As the pandemic coronavirus continues to ravage India, doctors are reporting a disturbing uptick in cases of a rare, potentially fatal fungal infection among people recovered or recovering from COVID-19.The infection is called mucormycosis, or sometimes “black fungus” in media reports, and it appears to be attacking COVID-19 patients through the nose and sinuses, where it can aggressively spread to facial bones, the eyes, and even the brain (rhinocerebral mucormycosis).

Mucormycosis is fatal in around 50 percent of cases.

The total number of mucormycosis cases in India is unclear, but media reports have tallied dozens to hundreds of cases.The startling increase in cases may be explained by India’s high number of people with diabetes, coupled with poor hygiene amid the critical COVID-19 surge, doctors speculate.

Mucormycosis is known to strike people who have compromised immune systems, especially people with diabetes—and those with poorly controlled diabetes in particular.

A literature review published in the New England Journal of Medicine in 1999 estimated that about 50 percent of all cases of rhinocerebral mucormycosis occur in people with diabetes.

But because of its population of over 1.36 billion people, the country has one of the highest raw totals of diabetes cases in the world, estimated to be around 77 million people, second only to China.