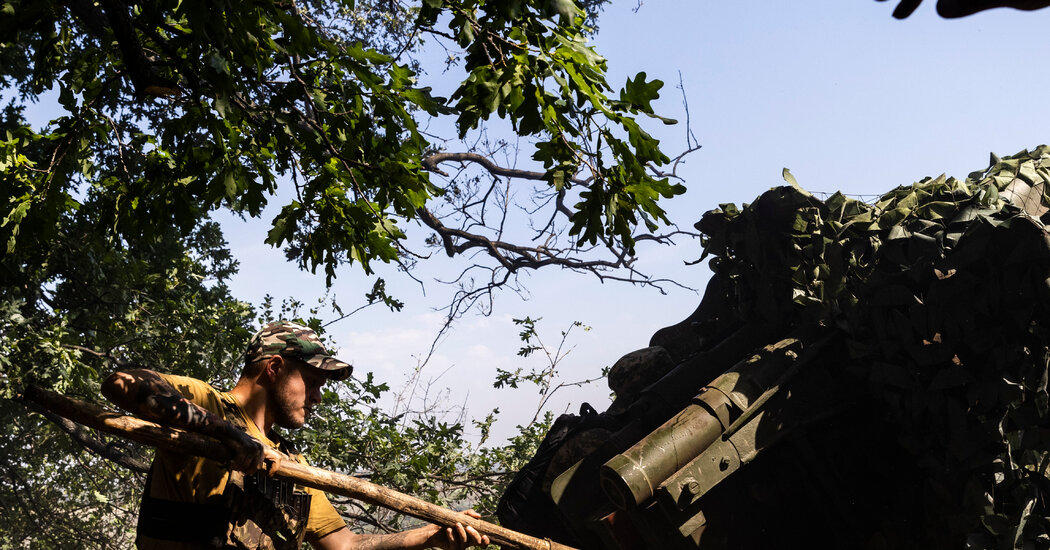 A senior Ukrainian official said there were 60 dead and 100 wounded in a series of explosions that destroyed several Russian warplanes in a Moscow-controlled region.A senior Ukrainian official suggested on Friday that the casualty toll from explosions at an air base in Crimea this week was far higher than previous estimates, further contradicting a Russian account about damage at a site that has been a vital jumping-off point for Moscow’s military operations since its invasion of Ukraine began in late February.The official, Anton Gerashchenko, an adviser to the minister of internal affairs, said that 60 pilots and technicians had been killed and 100 people wounded when a series of explosions rocked the Saki field on Crimea’s western Black Sea coast on Tuesday.There has been no independent confirmation of the toll, and most experts have focused on estimating the damage to Russian military equipment.The Russian authorities have said that munitions stored at the site exploded, and denied that any aircraft were destroyed.

Gerashchenko dismissed the Russian account as a “blatant lie” and compared the explosions to the political and military damage caused to Moscow by the sinking of Russia’s flagship in the Black Sea, the Moskva, in April.

A British military intelligence report said on Friday that at least five fighter bombers and three multi-role jets had been “almost certainly destroyed or seriously damaged” in the blasts, which it said had resulted from the detonation of up to four uncovered munition storage areas.A senior Ukrainian official has said the blasts were an attack carried out with the help of partisans, resistance fighters who aid the Ukrainian military on Russian-occupied territory.The explosions are all the more galling for Russia, because Crimea — which Moscow annexed in 2014 — has largely escaped fighting since February and the base was far from any recognizable front line.In an overnight speech, President Volodymyr Zelensky of Ukraine chided officials for disclosing details of attacks carried out by its forces, or from bragging.The Russian economy contracted steeply in the second quarter as the country felt the brunt of the economic consequences of its war in Ukraine, in what experts believe to be the start of a yearslong downturn.The economy shrank 4 percent from April through June compared with a year earlier, the Russian statistics agency said on Friday.Western sanctions, which cut off Russia from about half of its $600 billion emergency stash of foreign currency and gold reserves, imposed steep restrictions on dealings with Russian banks and cut access to American technology, prompting hundreds of major Western corporations to pull out of the country.But even as imports to Russia dried up and financial transactions were blocked, forcing the country to default on its foreign debt, the Russian economy proved more resilient than some economists had initially expected, and the fall in G.D.P.“We thought it would be a deep dive this year and then even out,” Laura Solanko, a senior adviser at the Bank of Finland Institute for Economies in Transition, said of the Russian economy.

Instead, there has been a milder economic decline, but it will continue into next year, putting the economy in a shallower recession for two years, she said.

“Russia withstood the initial sanction shock” and “has been relatively resilient so far,” said Dmitry Dolgin, the chief economist covering Russia at the Dutch bank ING.

Bernstam, a research fellow at the Hoover Institution at Stanford University, said the data released on Friday were in line with other reports from Russia.

In July, inflation was running more than 15 percent, according to the Russian central bank.

The bank forecast that the economy will shrink 4 percent to 6 percent this year, much less than it originally expected right after the start of the war.The economy will have a deeper contraction next year and not return to growth until 2025, the central bank said on Friday.“I don’t think the Russian economy is doing well at the moment,” Ms.A day after Ukraine reported that 13 civilians had been killed in a Russian missile strike on a district near Europe’s largest nuclear power plant, dozens more rockets slammed into the same area on Friday and wounded three people, including a 12-year-old boy, a regional official said.The head of the Dnipropetrovsk regional military administration, Valentyn Reznichenko, said that as many as 40 rockets had landed in the town of Marhanets, damaging four high-rise buildings and other houses, as well as a factory, shops and a cafe.

On the river’s eastern bank, only miles from the two cities, is the Zaporizhzhia nuclear power plant, which Russian forces seized control of in March.

Ukrainian officials say that Russia is using the plant’s grounds as a base from which to launch artillery attacks on Nikopol and other points on the far bank of the river, confident that Ukrainian forces will not return fire for fear of hitting a nuclear reactor.

On Friday, Ukrainian forces in the southern command said they had killed 19 Russians and destroyed an ammunition dump in a district in Kherson.

They also said that Moscow had launched eight strikes using helicopters, and four using aircraft, on Ukrainian forces in the province and on villages that Ukraine had reclaimed.

His counterpart in Luhansk said that Ukrainian forces had repelled a Russian advance near settlements still under his forces’ control in the province.

The Ukrainians have accused the Russians of directing strikes there to cut off energy supplies to other cities and to try to discredit the Ukrainian military in the world’s eyes.Ukrainian officials have accused Russia of hiding dozens of military vehicles with an unknown amount of munitions on the premises of at least two reactors.According to Ukrainian officials, a shell hit a power transformer at the No.

It did not explode, according to Ukrainian officials.

Putin may not be able to achieve one of his key war objectives: seizing the entire eastern region of the country this year, officials in the Biden administration and military experts say.

With 500 Russian troops killed or wounded every day, according to the latest estimate by American intelligence and military officials, Russia’s war effort has decelerated to a grinding slog, the officials said.Russia’s glacial pace in the east has been further stymied by the arrival of American multiple-launch rocket systems, which have allowed Ukrainian troops to take back some territory and made it more difficult for Russian soldiers to reach other areas.Earlier this summer, Russian forces captured the Luhansk region of Ukraine, the easternmost part of the country.

But in neighboring Donetsk, their progress has stalled, in no small part because of heavy casualties, American military officials said.

Putin, and foreign fighters, one of the officials said, speaking on the condition of anonymity because she was not authorized to discuss sensitive military assessments.

HANOVER, Germany — Gerhard Schröder, the former German chancellor, has filed a lawsuit against the country’s Parliament over its decision to cut funding for his post-chancellery perks because of his ties to Russia amid Moscow’s invasion of Ukraine, his lawyer said Friday, according to DPA, the German wire service.

1 A Famous Golden Palace in Spain Is Turning Purple, And Now We Know Why - ScienceAlert

2 Kanye West blasts Khloé Kardashian: 'You are lying,' and your family 'are liars' - Page Six