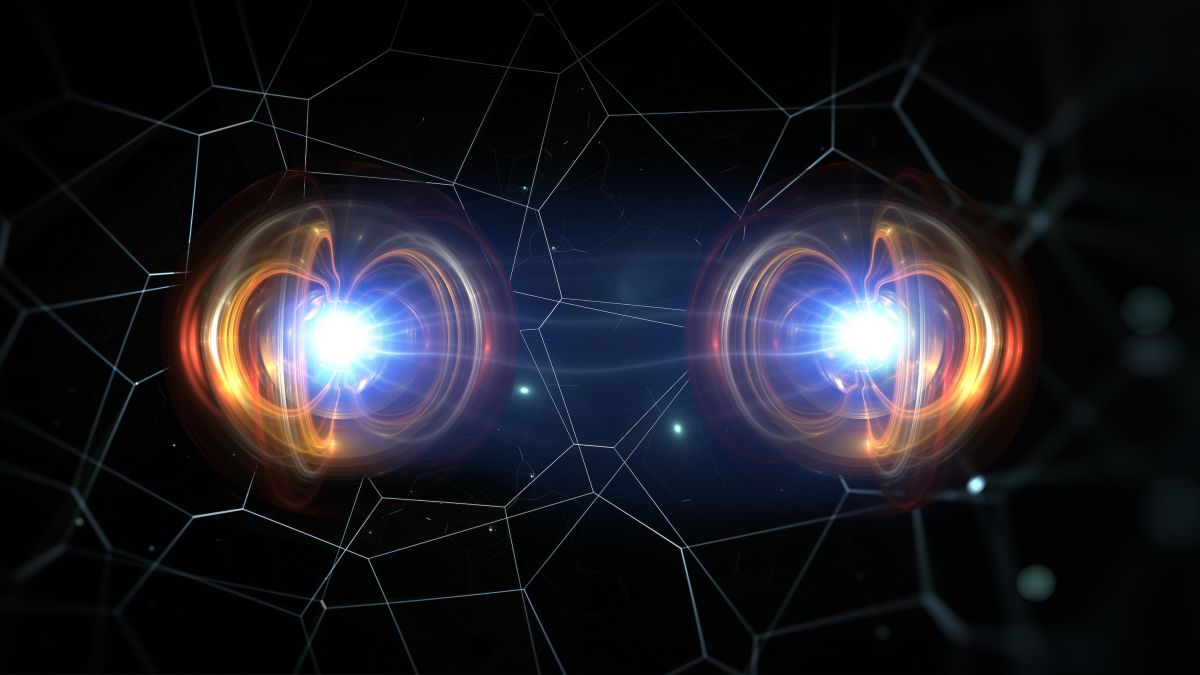 The technique could be used to protect quantum computer data from errors.By firing a Fibonacci laser pulse at atoms inside a quantum computer, physicists have created a completely new, strange phase of matter that behaves as if it had two dimensions of time. .The new phase of matter, created by using lasers to rhythmically jiggle a strand of 10 ytterbium ions, enables scientists to store information in a far more error-protected way, thereby opening the path to quantum computers that can hold on to data for a long time without becoming garbled.The inclusion of a theoretical "extra" time dimension "is a completely different way of thinking about phases of matter," lead author Philipp Dumitrescu, a researcher at the Flatiron Institute's Center for Computational Quantum Physics in New York City, said in a statement.Related: Otherworldly 'time crystal' made inside Google quantum computer could change physics forever.The physicists didn't set out to create a phase with a theoretical extra time dimension, nor were they looking for a method to enable better quantum data storage.

Instead, they were interested in creating a new phase of matter — a new form in which matter can exist, beyond the standard solid, liquid, gas, plasma. .

They set about building the new phase in the quantum computer company Quantinuum's H1 quantum processor, which consists of 10 ytterbium ions in a vacuum chamber that are precisely controlled by lasers in a device known as an ion trap. .But the development of quantum computers is held back by a big flaw: Qubits don't just interact and get entangled with each other; because they cannot be perfectly isolated from the environment outside the quantum computer, they also interact with the outside environment, thus causing them to lose their quantum properties, and the information they carry, in a process called decoherence.A key hallmark of moving from one phase to another is the breaking of physical symmetries — the idea that the laws of physics are the same for an object at any point in time or space.Creating a new topological phase inside a quantum computer also relies on symmetry breaking, but with this new phase, the symmetry is not being broken across space, but time. .By giving each ion in the chain a periodic jolt with the lasers, the physicists wanted to break the continuous time symmetry of the ions at rest and impose their own time symmetry — where the qubits remain the same across certain intervals in time — that would create a rhythmic topological phase across the material.

Instead of inducing a topological phase that was immune to decoherence effects, the regular laser pulses amplified the noise from outside the system, destroying it less than 1.5 seconds after it was switched on. .

After reconsidering the experiment, the researchers realized that to create a more robust topological phase, they would need to knot more than one time symmetry into the ion strand to decrease the odds of the system getting scrambled.This Fibonacci pulsing created a time symmetry that, just like a quasicrystal in space, was ordered without ever repeating.

5 The Milky Way is 'rippling' like a pond, and scientists may finally know why - Livescience.com

7 What is the largest known star in the universe? (What about the smallest?) - Livescience.com

1 A return to the moon will cost a fortune and be fraught with missteps - Boston.com

3 Netflix's Jeffrey Dahmer Series Is Being Criticized Online, Especially By A Victim's Family Who Didn't Know It Was Happening - BuzzFeed

5 The Lord of the Rings: The Rings of Power Episode 5 Review - "Partings" - IGN

12 Biden struggles, as does his party, as most Democrats look elsewhere for 2024: POLL - ABC News