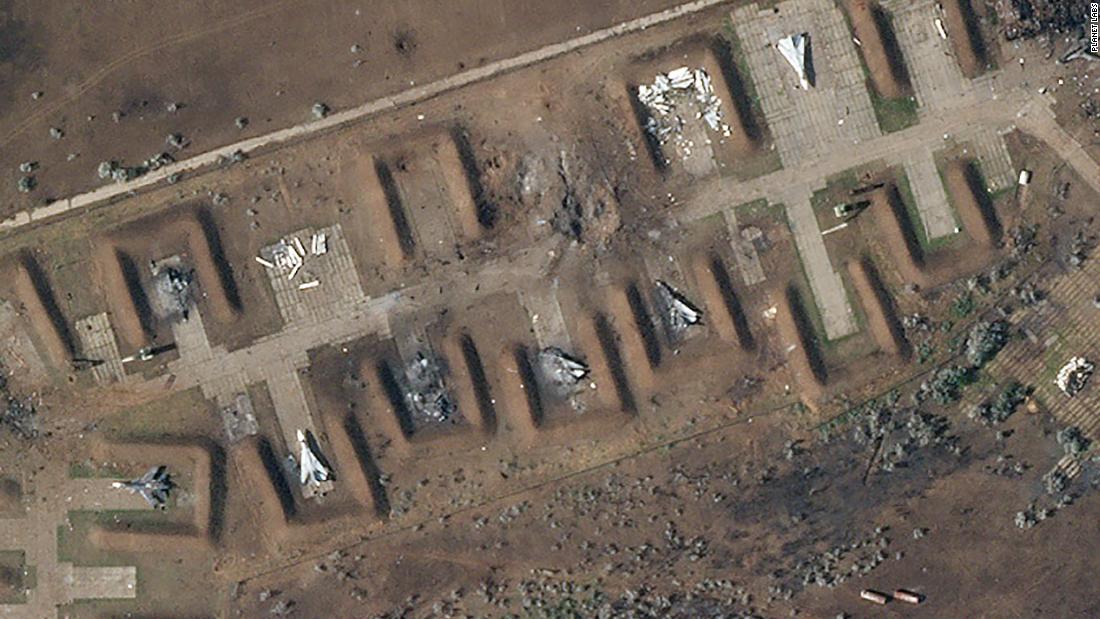 On Wednesday, the Ukrainian armed forces added nine aircraft to the tally of Russian military hardware they say has been destroyed since the Russian invasion of Ukraine began in February.The Ukrainian Ministry of Defense said it could not determine the cause of the explosions at the air base, which lies 225 kilometers (140 miles) behind the Russian front line, according to the Institute for the Study of War think tank.The Russian Ministry of Defense said the blasts were caused by aviation ammunition -- but did not say how it had been detonated.Video on social media, verified and geolocated by CNN as being from the air base, shows smoke rising from the base before it is rocked by three large, fiery explosions that send black mushroom clouds into the sky.

Two of the explosions happen almost simultaneously and a third occurs shortly thereafter.

The satellite photos also show ​the explosions burned a swath of vegetation around a portion of the air base.'Explosive propagation'Layton said the satellite images point to a deliberate attack, rather than an accident, due to the presence of three large craters.Whatever caused the craters could have caused other Russian munitions to explode, Layton said.

Some high-rise buildings lost power, while shops and a cultural center were damaged, TASS reported.

Four helicopters and a four-engine plane appear to have left the air base in the past 24 hours, the satellite images taken before and after the attack appear to show.Zelensky's Crimea vowSince 2014, the Saki Air Base has been home to a Russian naval aviation regiment, part of Russia's Black Sea Fleet, according to the state-run RIA-Novosti news service.Russia annexed Crimea from Ukraine in 2014, after Russian President Vladimir Putin sent military forces into what was then an autonomous region of southern Ukraine with strong Russian loyalties.

2 How should the US respond if Putin fires a nuclear weapon?

3 Millions of Americans will save on Medicare fees next year

9 Survival With Parkinson's Tied to Age at Onset, Cognition in... - Parkinson's News Today

10 An unstable slope above Prince William Sound is dropping faster. A complete failure could cause a tsunami. - Anchorage Daily News

14 Florida Gov. DeSantis warns those taking advantage of hurricane victims: 'We are a law and order state' - Fox News

15 Our Cancers Are Filled With Fungi - Gizmodo