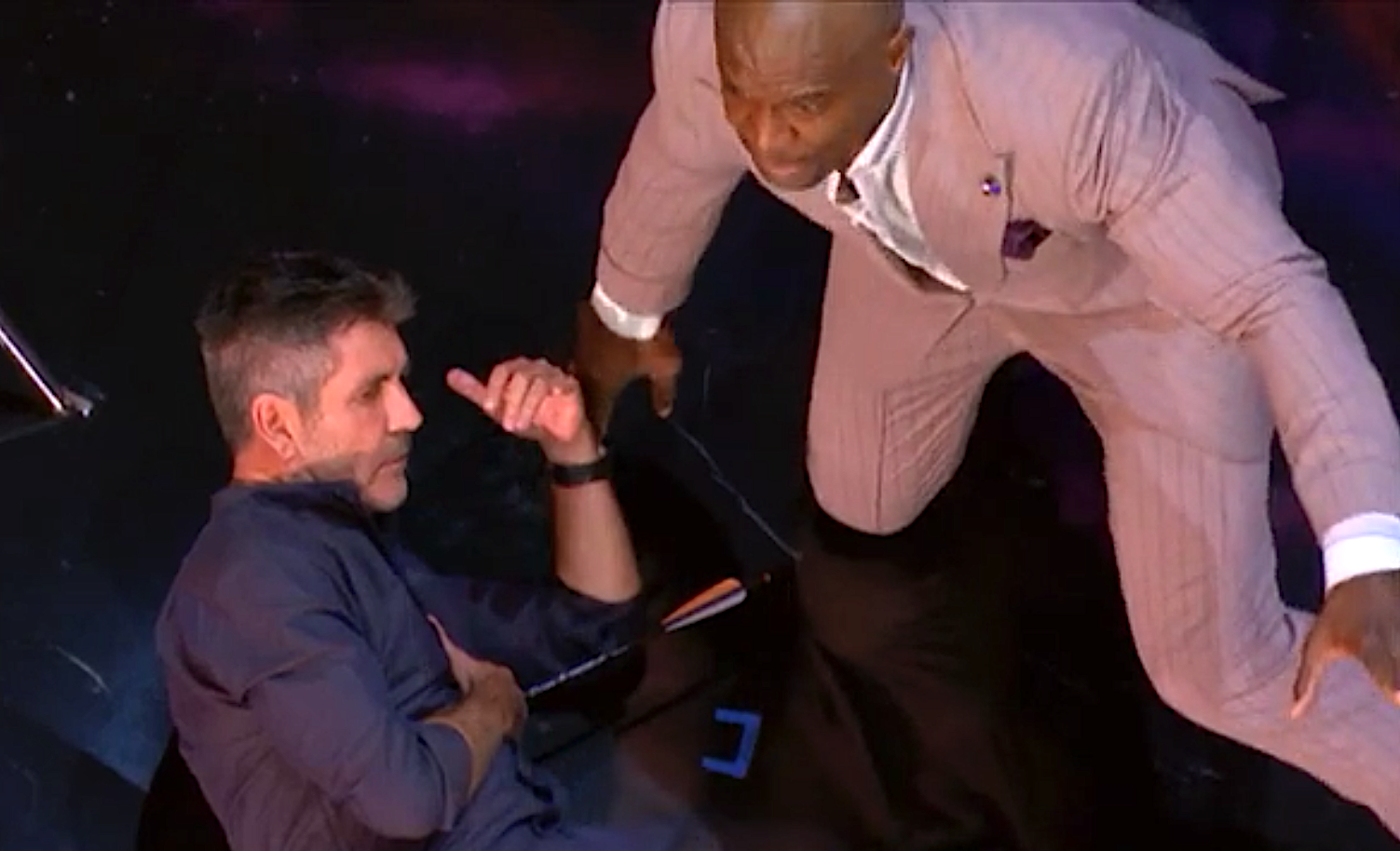 Jun 23, 2021 3 mins, 13 secs
And for one scary moment this week, it looked like he would be sidelined again — when an audition by a returning “comedy danger act” went horrifyingly awry, leaving Simon gasping on the stage floor with an arrow piercing his chest and panicked host Terry Crews crying out for a medic.Daredevils Ryan Stock and Amberlynn Walker first made a huge impression — albeit not necessarily a good one — five years ago during the AGT Season 11 semifinals, when Amberlynn accidentally shot a flaming arrow into her partner’s neck on live television.

But the bizarre incident went down as one of the most shocking moments in AGT history, from (according to Simon) “one of the nuttiest acts we’ve ever had.” This week, right after newest judge Sofia Vergara proclaimed that her favorite AGT acts are “stuff that is dangerous… when something horrific is going to happen, that’s what I love about this show,” Simon revealed that he’d invited back Ryan and Amberlynn… who announced, “We’ve been working on the crossbow act — and we’re doing scarier things.”.

And with respect, you are the last two I want doing anything with me.” Ryan then suggested that Sofia shoot Simon with an arrow instead — while blindfolded.

It was a classic be-careful-what-you-wish-for case for avowed danger enthusiast Sofia, but somehow, both judges agreed.

As soon as Sofia was properly blindfolded, Simon stuck a fake prop arrow onto his chest and took his position on the stage floor.

When Sofia pulled the trigger and subsequently heard the audience’s blood-curdling screams of horror, she whipped off her blindfold to see Simon sprawled on his back with an arrow sticking out of his body, looking like he’d been struck.

Sofia appeared to be in shock (although, to be honest, not all that terrified or aghast, considering that she thought she’d just killed her co-star) — before Simon let her know that she’d just been punk’d.

Sofia was only very mildly amused, and it was never quite explained why Simon had concocted this master plan to prank Sofia in the first place; this is her second AGT season, so it’s not like this was some sort of initiation hazing ritual, and April 1st is more than eight months away.

“You know I’m Colombian, and you know we take revenge,” Sofia warned Simon.

The Other Direction, a self-declared “world’s gayest boy band” that definitely had the X Factor, amused him with “Girl, You’re the Best,” an original ballad about letting a gal pal know you love her, but not in “that way.” Powerhouse singer Brooke Simpson, a member of the Haliwa-Saponi tribe with a dream of being the “first indigenous pop star,” wowed Simon so much with her cover of Lizzo’s “Cuz I Love You” that he compared her to Kelly Clarkson and Fantasia from his American Idol-judging glory days.

(Brooke actually was a four-chair/third-place contestant, coached by Miley Cyrus, on The Voice in 2017, but of course no one mentioned that.) And another spectacular vocalist, Jimmie Herrod, delivered such a stunning rendition of the Annie classic “Tomorrow” — a song that Simon had said was his least favorite ever, possibly because he’s still haunted by a certain failed audition from American Idol Season 4 — that Simon stated, “Wow, wow, wow.

It’s not my worst song anymore!” (He and his new nemesis Sofia were in agreement there, as Jimmie earned Sofia’s Golden Buzzer.).