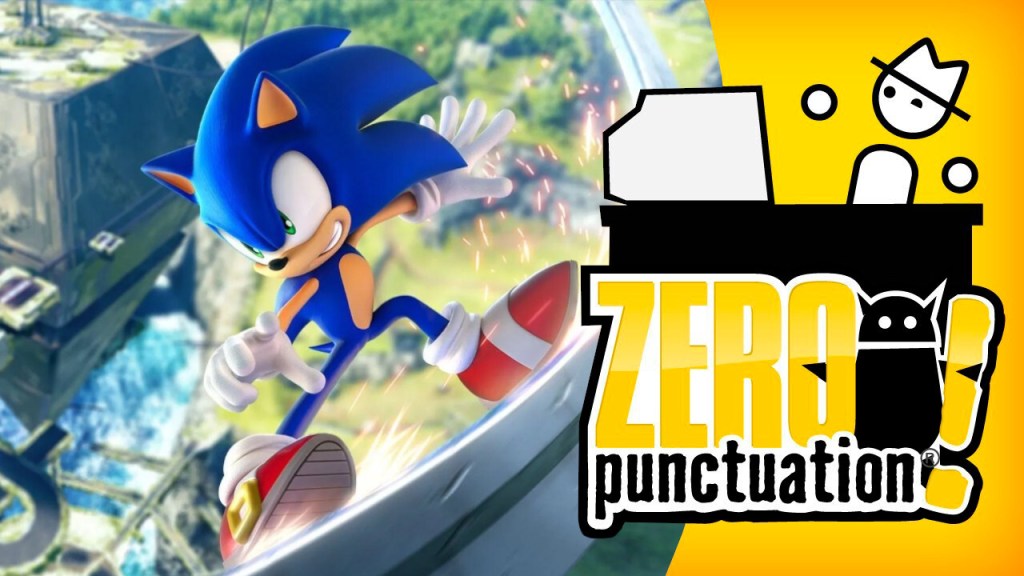 This week in Zero Punctuation, Yahtzee reviews Sonic Frontiers.Their handling of their signature franchise has been like watching two blind sea urchins trying to get through their wedding night.

Because my game reviewer gut instinct, forged over many years in the crucible of disappointment and cake, told me that open world design may well be the thing that finally makes 3D Sonic work.

I’ve always hated the aggressive linearity of Sonic levels, the way they keep shooting me right off the stage because I pressed the stick wrong or didn’t press jump in time or didn’t enter an uncontrollable sequence of boosters and springboards with the right positive attitude or because it was a Tuesday.

It’s like they took a washed out generic hilly landscape and then randomly sprinkled disconnected grind rails over it like it’s a freeze frame after an explosion at the U-bend factory.

And when Sonic wakes up alone in the pouring rain in a washed out landscape surrounded by the imposing ruins of a once vibrant civilization as haunting music plays, I felt, not for the first time, a strong urge to grab the Sonic franchise by the lapels, shake it back and forth and yell FIGURE OUT YOUR FUCKING TONE.

At heart it’s a collectathon, in each chapter one of Sonic’s pals is focussed on and Sonic progresses in their storyline by gathering a bunch of valentine cards for Amy or tubes of implied second butthole cream for Tails and that’s the excuse to roam the land seamlessly dipping in and out of a smorgasbord of microchallenges, as well as a handful of very un-seamless classic style Sonic levels which are, with the best will in the world, at least mercifully brief.

Almost everything on it was just “press a button during combo to make Sonic tell everyone to stop moving and pay attention to him doing a little stunt like a hyperactive 12 year old about to perform amateur dentistry with a skateboard and a concrete step.” I’d bought everything on it by the halfway point and then just had a load of unspent character points sitting around on the GUI for the whole game like a bloodstain on Henry Kissinger’s spectacles.

I’m talking about shit like holding up the plot at the end of the third island to make us play fucking pinball.

Thank you for freeing me from my world of uncertainty.” You have to do them as Super Sonic within a time limit set by your ring count, except the boss sets the pace of the fight so there’s very little you can do to kill it faster, it keeps knocking you away and by the time you’ve wrestled the camera back around to see what it’s doing you’re just in time for it to knock you away again.

Thanks a bunch, game, I’ll do a much better job now I’ve got a quarter of the time limit and a raging hate boner restricting blood flow to my brain.

Whatever happens, the sun will still rise in the morning, Sonic Team will still fuck up, and a seagull’s still gonna react poorly to having a cricket ball in its throat.

2 These healthy diets were associated with lower risk of death, according to a study of 119,000 people across four decades - MarketWatch

4 A deep dive: Weird and wonderful new creatures and features of the deep sea - Hindustan Times

6 'I cried all night': Millions of Chinese lose access to 'World of Warcraft' and other hit games - CNN