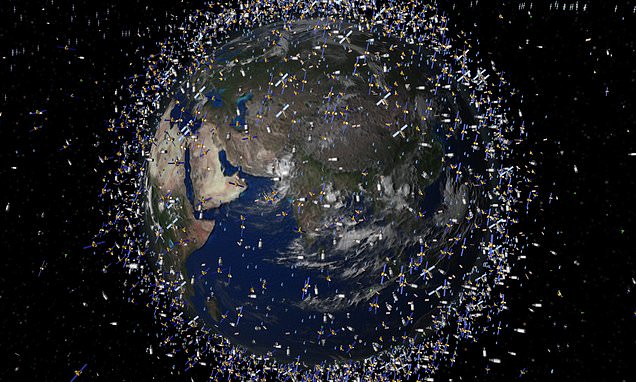 Jan 12, 2021 1 min, 54 secs
Pieces of unwanted debris left by humans in low-Earth orbit have become the equivalent of a 'new drifting island of plastic' in outer space, an expert has warned.Now, Ekaterini Kavvada, the directorate general of Defence Industry and Space at the European Commission, has warned that this space junk is 'not a theoretical threat but a reality' – similar to the threat posed by floating islands of plastic in the Earth's oceans.She added that the debris could cause damage to active European and other satellites, adding that if we do not react in a safe and timely way, the consequences will be 'detrimental.'.Pieces of unwanted debris left by humans in low-Earth orbit have become the equivalent of a 'new drifting island of plastic' in outer space, an expert has warned (artist's impression) .Speaking at the 13th European Space Conference, Ms Kavvada said: 'Orbiting space debris has become the new drifting island of plastic – if I had to make the comparison – that poses a looming threat for the safety and the security of all the traffic and space sustainability.'.However, Ms Kavvada warned that there are still nearly 3,000 inactive satellites drifting in space, with recent data suggesting there have been more than 500 break-ups or explosions of these space objects, resulting in fragmentation.She said that adding webs of networked satellites, known as mega constellations, to space could result in the Kessler syndrome – a chain reaction where more and more objects collide to create new space junk to the point where Earth's orbit became unusable.Rolf Densing, director of operations at the European Space Agency, who was also speaking at the space conference, said: 'We are living in a time the mega constellations are being built up, and the population of objects in orbit around us is growing by the thousands per year.There are an estimated 170 million pieces of so-called 'space junk', but only 22,000 are tracked (artist's impression)There are an estimated 170 million pieces of so-called 'space junk' - left behind after missions that can be as big as spent rocket stages or as small as paint flakes - in orbit alongside some US$700 billion (£555bn) of space infrastructureAround 500,000 pieces of human-made debris (artist's impression) currently orbit our planet, made up of disused satellites, bits of spacecraft and spent rockets
source :- Daily Mail
1. NASA's Upcoming Roman Space Telescope Could Image 100 Hubble Ultra Deep Fields at Once - SciTechDaily Jan 24, 2021 # science 3 mins, 2 secs 2. This One Spot on The International Space Station Is Kept Filthy – For Science - ScienceAlert Jan 24, 2021 # science 29 secs 3. “Against All Odds” –NASA’s Planet-Hunting Tess Discovers a Unique Star System with Six ‘Suns’ (Weekend Feature - The Daily Galaxy --Great Discoveries Channel Jan 23, 2021 # science 1 min, 18 secs 4. Largest sea on Saturn's mysterious moon Titan could be more than 1,000 feet deep - Space.com Jan 23, 2021 # science 1 min, 32 secs 5. Warm up with this cozy image of a hot spot on Jupiter - Space.com Jan 23, 2021 # science 55 secs 6. Scientists know how dinosaurs peed, pooped, and had sex, using an all-purpose orifice - INSIDER Jan 23, 2021 # science 2 secs 7. New light shed on Charles Darwin's 'abominable mystery' - BBC News Jan 23, 2021 # science 1 min, 44 secs 8. What happens to the brain on sudden impact? Egg yolks could hold the answer - Ars Technica Jan 23, 2021 # science 1 min, 59 secs 9. Astronauts prepare for 2 upcoming spacewalks - CNN Jan 22, 2021 # science 46 secs 10. Building Earth's largest telescope on the far side of the moon - CBC.ca Jan 22, 2021 # science 1 min, 29 secs 11. News . NASA's Deep Space Network Welcomes a New Dish to the Family - Jet Propulsion Laboratory Jan 22, 2021 # science 2 mins, 44 secs 12. Only 31 Magnetars Have Ever Been Discovered. This one is Extra Strange. It’s Also a Pulsar - Universe Today Jan 22, 2021 # science 1 min, 32 secs 13. Saturn's moon Rhea has a mysterious material on its surface - Inverse Jan 22, 2021 # science 51 secs 14. Ammonia May Lurk in the Ice of Saturn’s Moons, a Clue to Possible Oceans - Gizmodo Jan 22, 2021 # science 53 secs 15. Finally, Science Has Allowed Us to Gaze Upon a Dinosaur’s Orifice - The Cut Jan 22, 2021 # science 50 secs 16. Mind-Blowing Video Reveals The Formation of Salt Crystals From Individual Atoms - ScienceAlert Jan 22, 2021 # science 45 secs