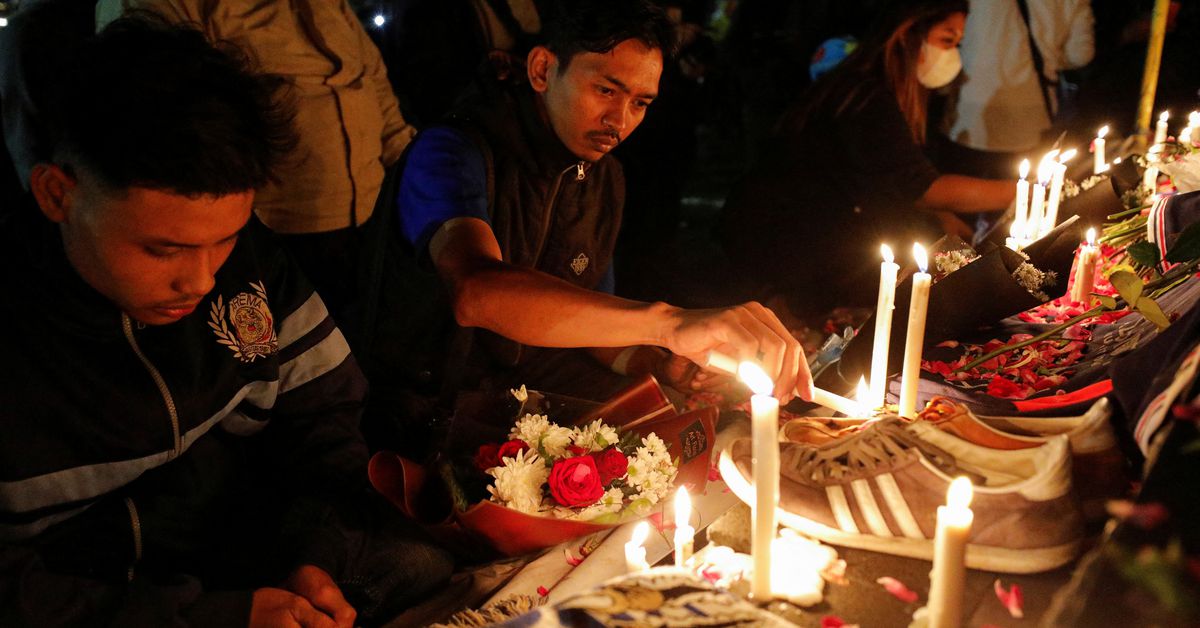 MALANG, Indonesia, Oct 2 (Reuters) - A stampede at a soccer stadium in Indonesia has killed 125 people and injured more than 320 after police police used tear gas to quell a pitch invasion, authorities said on Sunday, in one of the world's worst stadium disasters.Officers fired tear gas in an attempt to disperse agitated supporters of the losing home side who had invaded the pitch after the final whistle in Malang, East Java, on Saturday night, the region's police chief Nico Afinta told reporters.Jokowi, as the president is known, ordered the Football Association of Indonesia, PSSI, to suspend all games in the top league BRI Liga 1 until an investigation had been completed.Inside the stadium at night, a burned chair still lay unattended while slippers and shoes were strewn haphazardly.Arema football club supporters lights candles during a vigil outside the Kanjuruhan stadium to pay condolence to the victims, of a stampede following a soccer match between Arema vs Persebaya outside in Malang, East Java province, Indonesia, October 2, 2022.FIFA President Gianni Infantino said in a statement to Reuters that the football world was in "a state of shock following the tragic incidents that have taken place in Indonesia" and the event was "dark day for all involved".

Later at night people burned candles in a vigil at a lion statue, the local club's symbol.

Crowds pack stadiums but the football scene in Indonesia, a country of 275 million people, has been blighted by hooliganism, heavy-handed policing and mismanagement.The head of the Asian Football Confederation, Shaikh Salman bin Ebrahim Al Khalifa, said in a statement he was "deeply shocked and saddened to hear such tragic news coming out of football-loving Indonesia", expressing condolences for the victims, their families and friends.

15 7 Symptoms of Pancreatic Cancer You're Most Likely to Ignore, Including Weight Loss — Eat This Not That - Eat This, Not That

16 USMNT earns point, and some massive respect, in 0-0 draw with England at World Cup | Opinion