Telescope to be launched on giant stadium-sized balloon - Daily Mail 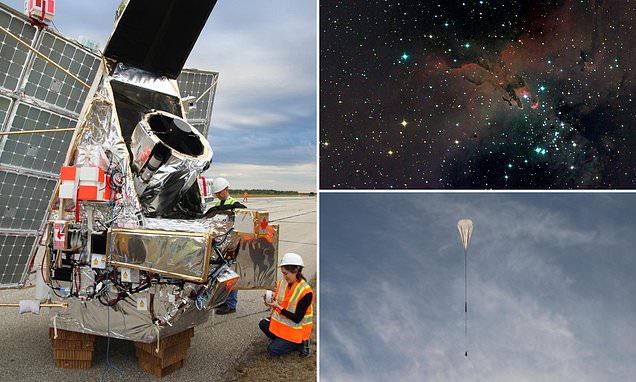 Jul 21, 2021 2 mins, 11 secs
A telescope will be launched into the upper atmosphere strapped to a balloon the size of a stadium next year, and it will be able to take images that rival Hubble, scientists behind the project claim.The telescope has a 0.5 metre diameter mirror and will be able to remain in the air for months at a time thanks to a new NASA superpressure balloon design.Unlike the James Webb telescope, launching in November and working in infrared, SuperBIT will operate in similar frequencies of light to Hubble, leaving the scientists behind the project to tout it as a natural successor to the ageing observatory. .The SuperBIT balloon in flight, above NASA's Columbia Scientific Balloon Facility, Texas, in June 2016 during tests to prepare for the main mission in 2022.The NASA Super Pressure Balloon is a sealed structure that is filled with a measured and specific amount of Helium lifting gas. .The balloon rises after launch, and the Helium expands as the ambient atmospheric pressure goes down. .The Super Pressure Balloon is designed to fly with a positive internal pressure at all times. .The Superpressure Balloon-borne Imaging Telescope (or SuperBIT) has a 0.5 metre diameter mirror and is carried to 40km altitude by a helium balloon with a volume of 532,000 cubic metres, about the size of a football stadium.This should enable a telescope to obtain images as sharp as those from the Hubble Space Telescope, explained the team.Test images made using the new balloon launched telescope (left) show the stunning Pillars of Creation in the Eagle Nebular, and right are the same pillars captured by Hubble'Apart perhaps from Galileo’s first use of a telescope for astronomy in 1609, Hubble has been the most important telescope in the history of astronomy'The Hubble Space Telescope is definitely one of the most successful space missions ever. 'Without the Hubble Space Telescope, it would be much more difficult for me to do my work in studying Jupiter’s northern and southern lights.