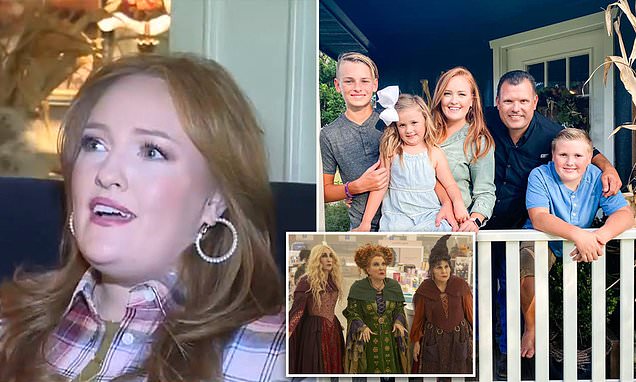 A Texas mother has warned American families that watching Hocus Pocus 2 could result in evil spells being cast in their homes - and potentially even open the gates of hell?Jamie Gooch, 33, of Troy, has urged parents to not let their children watch the PG-rated movie Hocus Pocus 2, which premiered on Disney+ September 30 to huge anticipation, with original stars Sarah Jessica Parker, Bette Midler and Kathy Najimy all returning.Jamie Gooch, 33, has railed against Hocus Pocus 2, claiming that watching the movie could open the gates of hell and send demons into unsuspecting Americans' homes .The Texan went on to say that the 'truth' about witches and warlocks in the 'satanic church' is that they 'abuse and sacrifice children in their "spiritual rituals."' .Gooch believes that simply watching a film about witches and spells could implicate viewers in their evil doing, even when it is fictional.  .'So before you hit play on the night of the premier of this movie, please ask yourself if not only your mind, but your children's minds, are strong enough to ward off the hypnotization and bewitching trance that will be coming through your screen to aid the desensitization of the coming evil in this world,' she wrote. .

It is a sequel to the 1993 cult classic, with Sarah Jessica Parker (left) Bette Midler (center) and Kathy Najimy (right) all reprising their roles as the evil Sanderson sisters

The film, a sequel to the cult classic 1993 film starring Bette Midler and Sarah Jessica Parker, has become the number one film to premiere on the streamer in the United States to dateIt tells the story of the three evil Sanderson sisters, witches murdered during the Salem Witchcraft Trials, reincarnated by a book of spells to seek revenge in modern-day Massachusetts.  Sarah Jessica Parker, Kathy Najimy and Bette Midler reprise their roles as the diabolical Sarah, Mary and Winifred Sanderson in the spooky comedyThe original film was released in July 1993 and was a box office flop, but eventually drew a loyal fanbase when it was re-released in theaters during the Halloween season and that base grew even larger after the movie made it to TV screens

2 ANALYSIS | Remember that electric-vehicle spat with the U.S.? The Europeans are still steaming | CBC News

7 In Peru's southern Andes, the La Nina means a worsening drought — now its residents face the reality of climate change

14 Al Roker is 'in very good care' after second hospitalization: 'Doctors are keeping a close eye on him,' Hoda Kotb says - Yahoo Entertainment

16 One Tree Hill stars recount being coerced into Maxim photoshoot - The A.V. Club