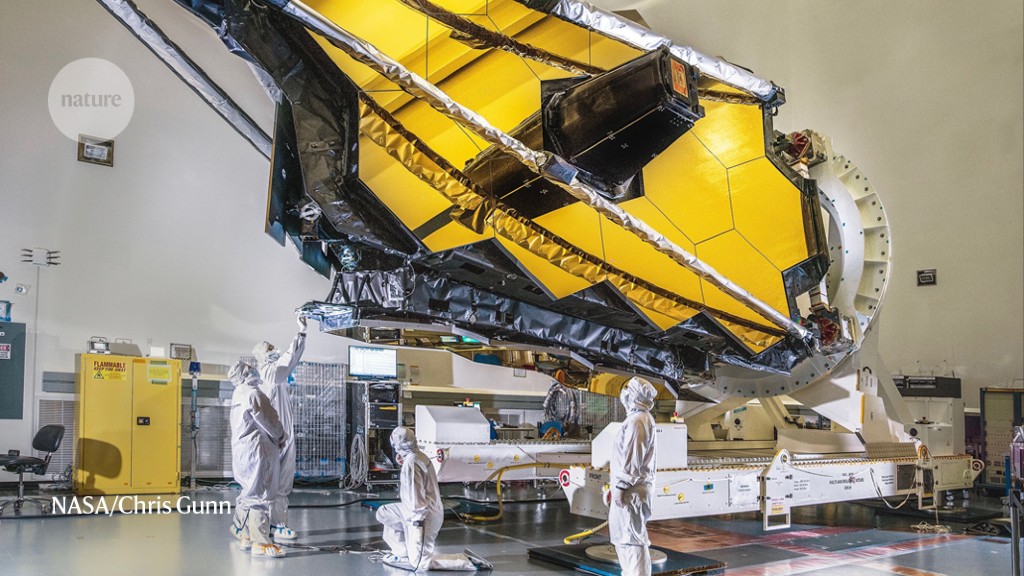 Now, three decades later, NASA’s James Webb Space Telescope (JWST) is finally about to launch, and Dang has scored some of its first observing time — in a research area that didn’t even exist when it was being designed.

Dang, an astrophysicist and graduate student at McGill University in Montreal, Canada, will be using the telescope, known as Webb for short, to stare at a planet beyond the Solar System.

The long-awaited Webb — a partnership involving NASA, the European Space Agency (ESA) and the Canadian Space Agency (CSA) — is slated to lift off from a launch pad in Kourou, French Guiana, no earlier than 22 December.

If everything goes to plan, Webb will remake astronomy by peering at cosmic phenomena such as the most distant galaxies ever seen, the atmospheres of far-off planets and the hearts of star-forming regions swaddled in dust.

Roughly 100 times more powerful than its predecessor, the Hubble Space Telescope, which has transformed our understanding of the cosmos over the past 31 years, Webb will reveal previously hidden aspects of the Universe.

The Webb telescope will spend hundreds of hours surveying this patch of sky, seen here in an image from the Hubble Space Telescope that captures 7,500 galaxies, some more than 13 billion years old.Credit: NASA, ESA, Rogier Windhorst (ASU), S.

Just this year, the telescope has been enveloped in controversy over whether it ought to remain named after James Webb, who headed NASA in the 1960s when a NASA employee was fired on suspicion of being gay.

The first glimmers of what would become Webb arose at a workshop at the Space Telescope Science Institute in Baltimore, Maryland, in 1989.

It was the year before the launch of the Hubble Space Telescope, and scientists were already thinking about how to follow up that transformative observatory.

What ultimately emerged were plans for a space telescope with a 6.5-metre-wide primary mirror, nearly three times the size of Hubble’s, and made up of 18 hexagonal segments.

Now, 32 years after its conception, Webb is finally sitting at the spaceport in Kourou in preparation for launch.

It is destined for a point in space 1.5 million kilometres from Earth — too far away for astronauts to visit and fix the telescope if something goes wrong.

Hubble required an after-launch repair in 1993, when astronauts used the space shuttle to get to the Earth-orbiting observatory and install corrective optics for its primary mirror, which had been improperly ground.

If it launches successfully, Webb will probe the cosmos in the near- to mid-infrared wavelengths, most of which are longer than Hubble can see.

That means Webb can study light that has travelled from faraway galaxies and been stretched to redder wavelengths by the expansion of the Universe.

Webb will also be able to study dust that enshrouds star-forming regions as well as the gas between the stars, both of which are not as visible at shorter wavelengths.

But Webb’s enormous mirror and suite of sensitive instruments (see ‘New eye in the sky’) mean that its discoveries will surpass those of any previous infrared space telescope, scientists say.

Because it can spot faint red objects, Webb is primed to observe some of the first stars and galaxies to form after the Big Bang created the Universe 13.8 billion years ago.One large study will look at a region of sky that is the size of three full Moons, aiming to capture half a million galaxies in it.

This survey, known as COSMOS-Webb, builds on an ongoing project that has used nearly every major ground- and space-based telescope to study the same patch of sky, which lies along the celestial equator and can be seen from both the Northern and Southern hemispheres.

Webb will look at this field for more than 200 hours, making it the biggest project for the observatory’s first year of science and creating a rich data set for astronomers to mine for discoveries.

This epoch, known as the cosmic reionization era, set the stage for today’s galaxies to evolve.

By observing these extremely distant astronomical objects, scientists can answer questions such as how the first stars assembled into galaxies and how those galaxies evolved over time.

Getting a better picture of galaxy formation in the early Universe will help astronomers to understand how the modern cosmos came to be.  Mariska Kriek, an astronomer at Leiden Observatory in the Netherlands, plans to use Webb to study distant galaxies that are no longer forming stars.

Those data, in turn, will help Kriek to unravel the mystery of how and why these galaxies stopped forming stars at some point in their history, unlike galaxies that did not stop3.

“This is really what James Webb is going to open up.”.

When not looking at stars and galaxies, Webb will spend a lot of its time scrutinizing planets, particularly some of the thousands that have been discovered beyond the Solar System.

In its first year, Webb will study some of the most famous exoplanets, including the seven Earth-sized worlds that orbit the star TRAPPIST-1.

The repeated delays in developing and building Webb actually worked to the benefit of exoplanet scientists, says Néstor Espinoza, an astronomer at the Space Telescope Science Institute.

At one point, Webb was scheduled to launch in 2011, but astronomers didn’t confirm the first atmosphere around an exoplanet until 20054,5.

Hammel and others plan to use the telescope to study the upper atmospheres of the ice giants Neptune and Uranus, the chemical make-ups of which are best seen in the infrared.

Earlier this year, the controversy over the telescope’s naming broke out; NASA announced in October that it had no plans to change the name, following a historical investigation into James Webb’s actions.

The telescope will begin cooling down as it travels towards its final orbit around the gravitationally stable point in space known as L2, or the second Lagrange point.

By June 2022, if all goes well, Webb will finally be ready for science.

Astronomers in Europe will get at least 15%of the observing time, and ones in Canada will have at least 5%, for their space agencies’ contributions to Webb.