The West's historic drought is threatening hydropower at Hoover Dam

The West's historic drought is threatening hydropower at Hoover Dam 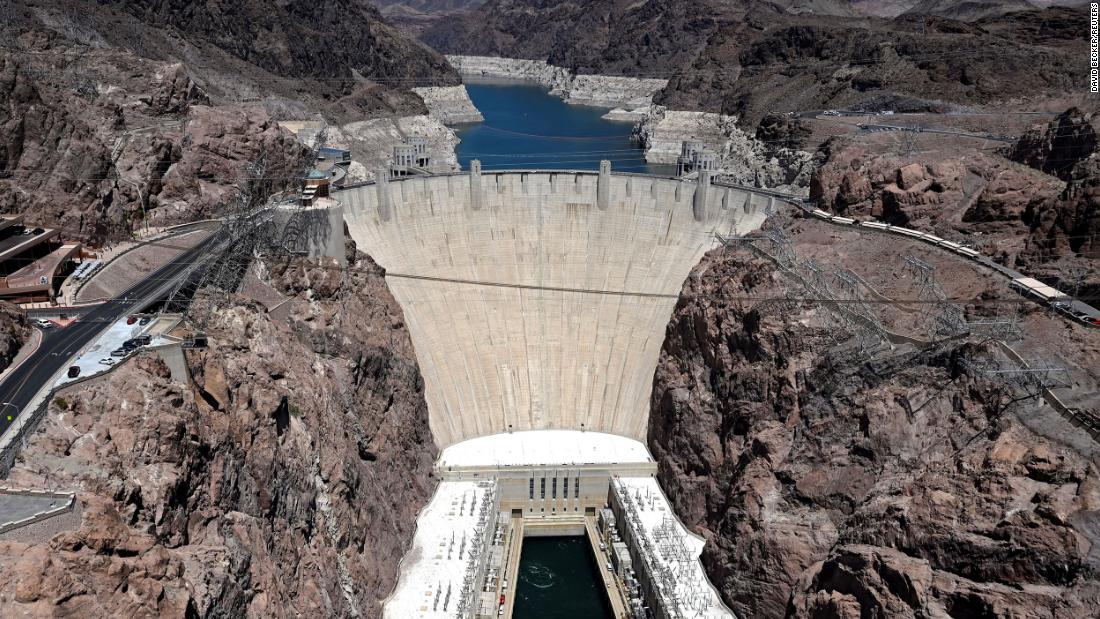 Declining water flow has cut the dam's power generation capacity almost in half -- around 1,076 megawatts -- as of June.The water elevation in Lake Mead is around 1,040 feet above sea level.According to the bureau, states across the Colorado River Basin, Mexico, tribes as well as power and water authorities are currently negotiating plans to conserve water and prevent Lake Mead from reaching "dead pool," while also stabilizing power generation.

Because of Lake Mead's dwindling water levels, the government last year announced a Tier 1 shortage on the Colorado River for the first time, prompting water cuts for Arizona, Nevada and Mexico.

A similar challenge faces Lake Mead's upstream neighbor, Lake Powell, the country's second largest reservoir.To keep the Glen Canyon Dam in operation, the reclamation bureau announced in May it was taking emergency steps to release more water from upstream reservoirs while holding back water releases from Lake Powell itself, which typically sends water downstream to Lake Mead."When both Lake Mead and Lake Powell were filled, it was about making sure that there was water for the Western US, but it was also about ensuring that there was power available to the West," Averyst said.

"And so what the federal government is up against right now is ensuring that we continue to have water where we need it to go, but also that we're able to have enough water in each of the reservoirs to generate power."

As the Bureau of Reclamation gears up for a critical 24-month forecast report that will determine the next round of water cuts, its biggest goal is to prevent Lake Mead from reaching "dead pool" by continuing talks and negotiations with.Averyst and officials who talked to CNN say there is hope it won't get to that point, and that it's just a matter of adapting.

9 WH Spox Kirby: We Need to Lessen Dependence on OPEC, That's Why Biden Issued Drilling Leases, and Is 'Working So Hard on Clean Energy'

16 Aaron Judge comes through with homer No. 62 on an unforgettable night in Texas | Opinion

1 People Are Using Among Us Lobbies For Sex - Kotaku

2 Ukraine takes back dozens of towns in 'annexed' regions; Putin is 'out of moves,' ex-CIA chief says - CNBC

3 After 8 Years Of Hard Work, India's 'Mangalyaan' Runs Out Of Fuel: Report - NDTV

4 Dozens dead from Ian, one of strongest, costliest US storms - The Associated Press

12 Credit Suisse is under pressure, but short sellers appear to be eyeing another global bank - CNBC

16 Sacheen Littlefeather, made famous by Marlon Brando, was a lifelong warrior for justice