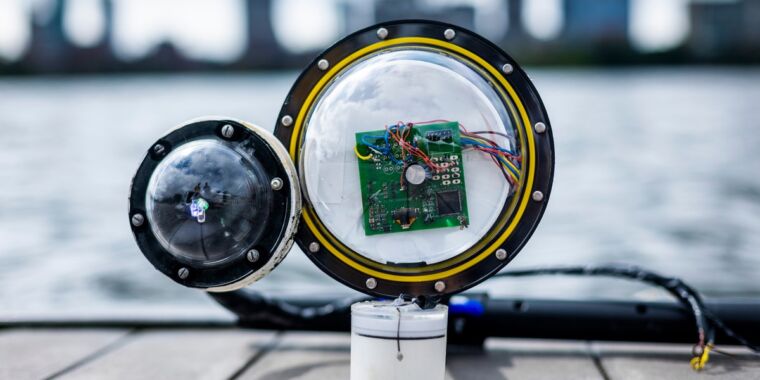 MIT engineers have built a wireless, battery-free underwater camera, capable of harvesting energy by itself while consuming very little power, according to a new paper published in the journal Nature Communications.

The system can take color photos of remote submerged objects—even in dark settings— and convey the data wirelessly for real-time monitoring of underwater environments, aiding the discovery of new rare species or monitoring ocean currents, pollution, or commercial and military operations.

We already have various methods of taking underwater images, but according to the authors, "Most of the ocean and marine organisms have not been observed yet." That's partly because most existing methods require being tethered to ships, underwater drones, or power plants for both power and communication.

While it's possible in principle to harvest energy from ocean waves, underwater currents, or even sunlight, adding the necessary equipment to do so would result in a much bulkier and more expensive underwater camera.

So the MIT team set about developing a solution for a battery-free, wireless imaging method.

The team also needed to develop a low-power flash as well, since most underwater environments don't get much natural light.

The authors estimate that their underwater camera is about 100,000 times more energy-efficient than its counterparts, and could run for weeks on end.

The team was also able to use their underwater wireless camera to monitor the growth of an aquatic plant (Aponogeton ulvaceus) over several days, and to detect and locate visual tags often used for underwater tracking and robotic manipulation.

It's possible that one could also make use of existing mesh networks of buoys on the ocean surface, or networks of underwater robots like Argo floats, to remotely power the energy-harvesting cameras.

“One of the most exciting applications of this camera for me personally is in the context of climate monitoring," said Adib.

2 Rail workers speak out after Biden forces unions to accept deal: 'He turned his back' - Fox Business

4 Road rage stunner: 2 in 3 drivers keep a weapon in their car - Study Finds

5 A 1930s eugenics experiment set the course for women's sizing

6 These monkeypox researchers warned that the disease would go global - Nature.com