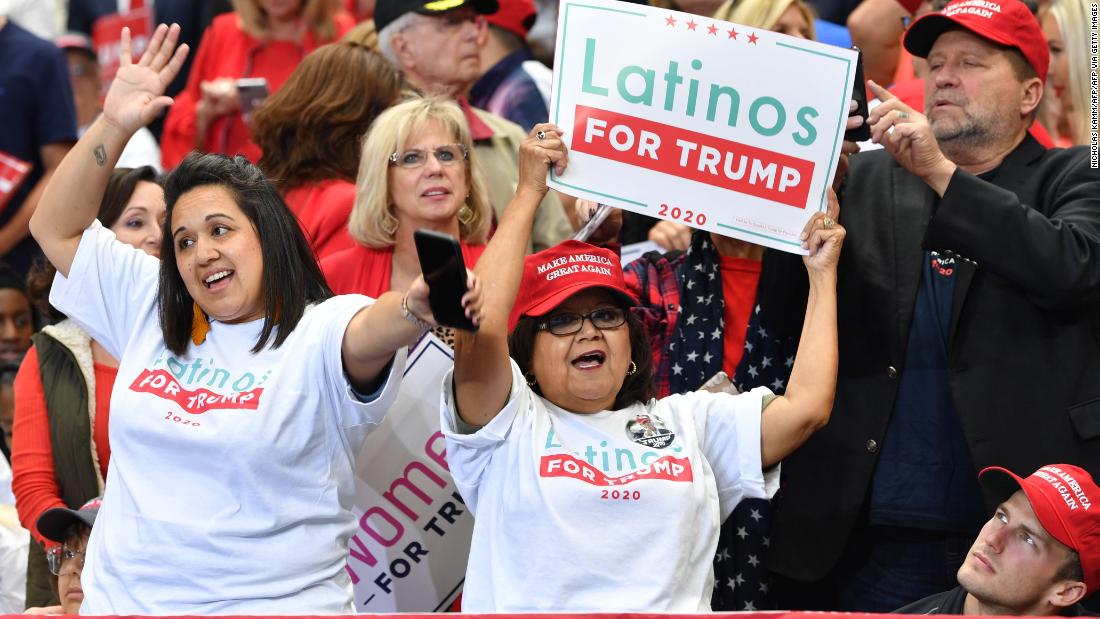 Sep 16, 2020 5 mins, 37 secs
Although the President is still trailing heavily -- an analysis by CNN's Harry Enten found Biden is winning Hispanic voters by 28 percentage points -- Biden is underperforming Clinton, who led by 37 percentage points in an average of final pre-election polls.

The narrowing gap with Latinos is putting more pressure on Biden to hold or even expand his lead with White and older voters, two blocs with whom the Democrat has cut into Trump's lead, allowing him to maintain an overall lead in national polling and crucial states, like Minnesota, Wisconsin and Michigan.

Asked why his numbers among Hispanic voters are as low as they are right now, Biden said on Monday that his number are much higher than Trump's, but added, "But they gotta go higher."

Some Democrats, concerned that Biden's advantage with White voters could narrow, believe he needs to dial up his focus -- and dedicate more resources -- toward targeting the diverse array of Latino voters in key states like Florida, Nevada and Arizona that could tip the balance for the former vice president and win him the White House in November.

"Any movement of White swing voters regressing to the mean, or any downtick of support from White swing voters for Biden, and (his) not doing the work to continue to increase support and run up the score with Hispanic voters in these key states could amount to a closer election than we would be comfortable with," said Stephanie Valencia, co-founder of EquisLabs and Barack Obama's deputy Latino vote director in 2008.

The fight for Hispanic voters was on full display this week, with Trump courting voters in Nevada and Arizona as Biden headlined a Hispanic Heritage Month event in central Florida.

Trump and his campaign have made a concerted effort to right their messaging wrongs of four years ago and close the gap with Hispanic voters using a three-pronged approach: Tie Biden to the left wing of his party in an effort to win over immigrants from authoritarian socialist countries; promise economic growth and low taxes to the sizable pool of Hispanic Americans starting small businesses; and pledge to combat gang activity in big cities in an effort to win over older Hispanic voters.

Much of this activity has flown under the national radar and comes packaged with a lighter touch than Trump delivers in his speeches and tweets.

But his campaign is betting that Hispanic voters, especially those who don't follow the news closely or haven't been negatively impacted by his administration's actions, will focus instead on his economic messaging and be scared off by the campaign's false attacks on Biden.

"I have been in Republican politics for a long time and this is really the first presidential campaign where I have seen major investment into Latino outreach," said Mercedes Schlapp, a top Trump operative who was born in Florida and is Cuban American.

But the biggest impact, operatives said, was the fact that Trump seemingly dominated messaging in key states like Florida for months, with Biden ceding the floor to Trump.

Lorella Praeli, president of Community Change Action and Clinton's national Latino vote director in 2016, said it was a "mistake" that Biden has not started his outreach earlier, but the mere fact that Biden's outreach took time to ramp up should not dissuade the campaign from committing substantial resources now.

"We should not get cynical about the moment and the opportunity we have in front of us," said Praeli.

Trump's primary focus might be ginning up White resentment, they said, but he also taps into other unsavory instincts in the American voting public -- especially among men.

"What appeals to Latino voters who are supporting Trump is the same thing that appeals to voters who support Trump," said Sonja Diaz, founding executive director UCLA Luskin School of Public Affairs, a former policy counsel to Sen.

It's just an American male phenomenon."

"The devastation that the community has seen both from a public health perspective and an economic perspective is one that has drastically impacted Latino voters in all of the battle ground states," said Chavez Rodriguez.

Those are the realities that I think Latinos are facing today."

The campaign is also working to combat election disinformation, with organizers reporting that an array of wild, false conspiracy theories are being directed at Spanish-speaking voters, especially in battle ground Florida.

Rodriguez said that the campaign is "seeing voter suppression at a whole new level," so while the Trump campaign is actively reaching out to Latino voters, others are working to "keep folks from actually engaging in a critical election that has a huge impact."

"It is really disturbing that some of those tactics are being used," she said

But even Democrats close to Biden concede that it took the campaign a long time -- because of the spread of the coronavirus and the campaign's money issues early in the general election -- to commit the needed resources to Latino outreach.

Ruben Gallego, a Biden supporter and surrogate, said that he spoke to Biden about the initial lack of Hispanic outreach and the former vice president acknowledged that his team had been slow out of the gate.

"The Biden campaign would admit they were slow to get out to Latinos communities.

Trump's attempts to portray Biden as a tool of the radical left might not resonate broadly, but in a state where so many Latino voters, especially older ones, are sensitive to even the whiff of socialism, Biden's position as the de facto leader of an increasingly progressive Democratic Party has the potential turn off voters.

A Marist College poll released earlier this month found Biden and Trump tied at 48% among likely voters in Florida.

Other polls, like a Monmouth University poll released this week found Biden with a substantial lead over Trump among Latino voters -- 58% to 32%.

Despite the variability in polls among Hispanic voters, Republicans believe that those polls show Trump's focus on socialism is working.

"Biden is kind of caught in the middle," said Chris Hartline, a top aide to Republican Florida Sen.

Valencia said that is probably the right strategy, especially in Florida, a TV-driven state with a diverse Latino population.

"We are gaining every day with Latino voters.