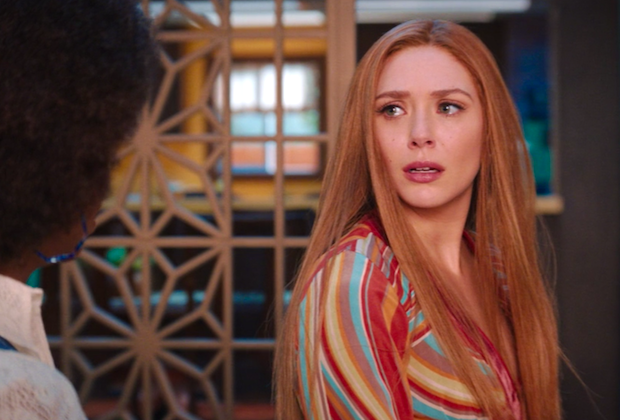 Jan 22, 2021 1 min, 22 secs
Delightful nods to classic shows like The Dick Van Dyke Show and Bewitched seem to camouflage a more sinister reality — remember that odd bloodstain moment with Dottie in Episode 2.At the end of Episode 3, Wanda’s highly accelerated pregnancy results in a lovely surprise for her and Vision: twins, named Tommy and Billy.

It’s the first time in the series that Wanda seems able to recall anything about her past, and according to Elizabeth Olsen, this is just the beginning?

“The experience of having just gone through real birth — like a real birth experience, because they’re real, breathing creatures that she’s given birth to [Laughs] — I believe that’s what has sparked this memory that was squashed,” Olsen tells TVLine.

But just as Vision began to evaluate all that eeriness, a “skip” in the video rewound us a bit, glossing over his presentation.

Similarly, when Geraldine, at episode’s end, noted that Wanda’s twin Pietro had been killed by Ultron, Wanda seemed bothered by the injection of harsh reality?

But just as Vision returned inside to find Geraldine suddenly gone and Wanda unbothered/even pleased, we saw Teyonah Parris’ character tumble through some sort of digital membrane that is surrounding Westview  and land in a grassy field adjacent to a military (S.W.O.R.D.?) camp erected just outside of the suburban enclave — hinting that she is, in fact (SPOILER ALERT, though the MCU announced it way back in July 2019) a grown-up Monica Rambeau, as in the daughter of Captain Marvel’s air force pilot Maria Rambeau